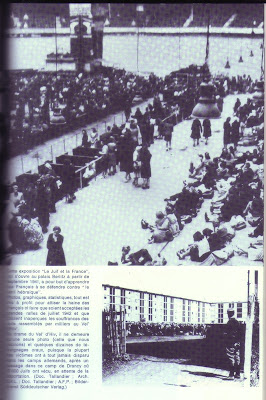 Haaretz has written about French president Francois Hollande's visit to the site of one of the worst cases of collaboration with the nazis during WW2:


French President Francois Hollande's decision to speak last week at a commemoration of the single worst deportation of Jews in Western Europe during World War II is an important step toward addressing European anti-Semitism.

On an early morning in July 1942, 13,000 Jews were awakened in their Parisian homes by French gendarmes, or soldiers. They were pushed into buses and trucks and taken to one of the most popular sporting stadiums in France. Located in the heart of working class Paris, the Vél d’Hiv was the cathedral for France’s most passionate sport – cycling.

The Jews were left in the stands of this revered velodrome to swelter in the summer heat. The glass roof had been painted dark blue as part of black-out procedures, and the windows were shut tight. A single tap provided water for the victims. Children were separated from their parents. The whole operation was carried out with scarcely a German uniform in sight.

This was French anti-Semitism organized as state action by French civil servants, police officials and other public functionaries. The Jews were later taken to German extermination camps on Polish soil. But the historic importance of Vél d’Hiv is that the horrible sequence of hatred was initiated by French citizens in the name of France.

And that is why it was obliterated from official French history for decades and why Hollande’s decision, early in his presidency, to speak about the duty to remember Vél d’Hiv is so important. A recent survey showed that 60 percent of 18 to 24 year olds in France have never heard of the Vél d’Hiv mass round-up of Jews.

The related picture I've uploaded is from Henri Amouroux's book Les Passions et les Haines, which shows a scene from the urban concentration camp set up by the traitors to humanity. Incidentally, while Hollande's visit in itself is a noble act, it's not clear whether he's acknowledged his father's own collaboration with the nazis at the time, and if he condemns the shame it brings upon him.

And if he keeps up the PC tactic of even remotely calling Israel an "occupier" and excusing Islam, then he hasn't done much to distinguish himself from Jacques Chirac, who was notorious for that.
Posted by Avi Green at 6:34 AM