Israeli archaeologists have discovered a 2,700-year-old seal that bears the inscription "Bethlehem," the Israel Antiquities Authority announced Wednesday, in what experts believe to be the oldest artifact with the name of Jesus' traditional birthplace. The tiny clay seal's existence and age provide vivid evidence that Bethlehem was not just the name of a fabled biblical town, but also a bustling place of trade linked to the nearby city of Jerusalem, archaeologists said.

Eli Shukron, the authority's director of excavations, said the find was significant because it is the first time the name "Bethlehem" appears outside of a biblical text from that period. Shukron said the seal, 1.5 centimeters (0.59 inches) in diameter, dates back to the period of the first biblical Jewish Temple, between the eighth and seventh century B.C., at a time when Jewish kings reigned over the ancient kingdom of Judah and 700 years before Jesus was born.

The seal was written in ancient Hebrew script from the same time. Pottery found nearby also dated back to the same period, he said. 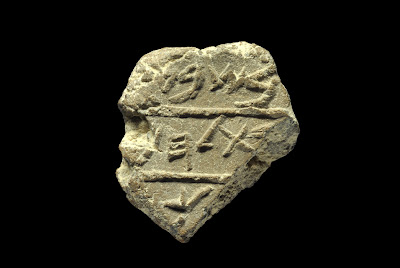 EVERY TIME THEY STICK A SHOVEL INTO THE HOLY LAND THEY PROVE THE BIBLE IS TRUE.