UH-OH: EASTERN MEDITERRANEAN CALDERA - THAT MIGHT HAVE HAD CATACLYSMIC ERUPTIONS IN THE PAST - GETTING INCREASINGLY MORE ACTIVE 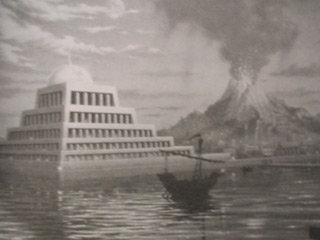 The volcano that may have given rise to the legend of Atlantis has awakened, researchers say.

The cataclysmic eruptions at the Greek isle of Santorini about 3,600 years ago that spewed forth about 9.5 to 14.3 cubic miles (40 to 60 cubic kilometers) of lava devastated the ancient seafaring Minoan civilization, potentially inspiring the legend of the lost city of Atlantis...

... Over the next four millennia, the largely underwater caldera at Santorini has experienced a series of smaller eruptions, with five such outbursts in the past 600 years, ending most recently in 1950. 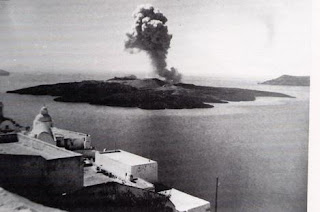 After a 60-year lull, Santorini awakened in January 2011 with a swarm of tremors, each magnitude 3.2 or less, new GPS research has revealed.

Investigators had installed a GPS monitoring system in the area in 2006.

... The scientists found that by June 2011, the 22 GPS stations had been pushed 0.2 to 1.3 inches (5 to 32 millimeters) farther from the caldera than they had been just six months earlier... and data from September 2011 to January 2012 showed the land near the volcano was swelling at an accelerating rate, reaching 7 inches (180 mm) of growth per year.

Computer models of the deforming Earth suggested the swelling was due to an influx of nearly 500 million cubic feet (14.1 million cubic meters) of magma into a chamber 2.5 to 3.1 miles (4 to 5 kilometers) below the surface. 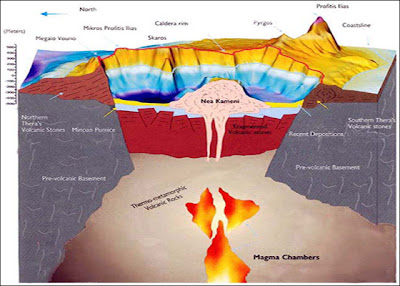 The scientists note this ongoing influx of magma does not necessarily signal an impending explosion — this swelling is only a fraction of that behind the Minoan eruption.

"We've witnessed similar deformation events at other large calderas — Yellowstone, Long Valley California, and Campi Flegrei— without eruption," said researcher Andrew Newman, a geophysicist at the Georgia Institute of Technology. "Globally, we've observed that on average, 90 percent of magmatic intrusion events do not reach the surface."

"However, we cannot say for certain that this will not erupt either,"

THERE HAVE BEEN A LOT OF MAJOR QUAKES LATELY ALL AROUND THE GLOBE.

WE MIGHT BE HEADING INTO A VERY ACTIVE AND DESTRUCTIVE VOLCANIC AND EARTHQUAKE PROBE ERA..