ROMNEY: OUT OF THE LIMELIGHT, A LIFE OF PRINCIPLED GOODNESS


ROMNEY ISN'T A CAREER POLITICIAN OR A LIFETIME POLITICAL ACTIVIST.

HE'S A BRILLIANT AND GOOD MAN WHO GOT WEALTHY STIMULATING ECONOMIC GROWTH FOR THE NATION AND NEVER LET THAT WEALTH OR THE ROUGH'N TUMBLE CONFLICT OF COMPETITION IN THE MARKETPLACE DISTRACT HIM FROM ALSO DOING MORE IMPORTANT THINGS IN HIS PRIVATE LIFE:


... Romney and his sons once raced across a dark, placid lake on Jet Skis, “Baywatch”-style, to rescue strangers and their dog, McKenzie, after their boat capsized.

... Romney once temporarily closed the Boston headquarters of his private-equity firm to round up his co-workers, accountants and lawyers and fan out across Manhattan to search for Melissa Gay, his Bain Capital partner’s missing 14-year-old daughter.

... Romney spent years counseling neighbors on their marriages and adoptions, helping the unemployed feed their families, and ministering to the sick and the addicted.

ROMNEY IS A BETTER MAN THAN OBAMA. 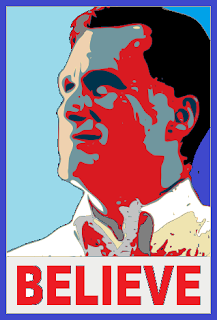 THE GOP NEEDS TO CUT A COMMERCIAL HIGHLIGHTING THIS STUFF.
Posted by Reliapundit at 7:32 PM