An ancient flute thought to be the world’s oldest musical instrument has been found in a cave in Germany. Made of vulture bone, the instrument dates from around the time that humans began colonising Europe, around 33,000BC. 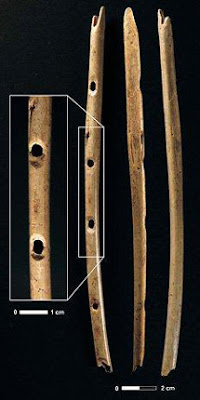 The discovery by a group of scientists has led them to believe humans played music much earlier than previously thought. Fragments of three flutes were found in the Hohle Fels cavern in southwest Germany by a team from Tubingen University. The near-complete vulture bone flute is 20cm long, has five finger holes and v-shaped notches that would have acted as a mouthpiece. Scientists think the instrument would have been held like a recorder, but the player would have blown across it like a flute. The other two flutes dug up by the archaeologists are made from ivory, thought to be from mammoth tusks.

HERE'S A SAMPLE OF WHAT THEY MIGHT HAVE PLAYED ON THESE FLUTE-LIKE RECORDERS: