A 'giant rat' has been caught and killed by a man in the North East of England. 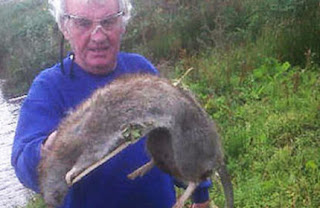 Grandad Brian Watson killed the large rodent with a piece of wood near Consett, County Durham. It was first spotted by the boyfriend of Mr Watson's granddaughter, while he was out cutting grass on a tractor. In an interview with Sky Tyne and Wear, Mr Watson said: "I heard him shouting there was a large rat.  I came running round the corner. I managed to grab some wood on the way.It wasn't very fast. I managed to kill it there and then. I've never seen a rat as big in my life before."

VIDEO AT THE LINK.

I THINK WE SHOULD BRING THIS GUY TO THE USA.


THERE ARE SOME GIANT RATS IN DC THAT NEED ATTENTION!
Posted by Reliapundit at 7:26 PM