THE FRUITS OF SOCIALISM 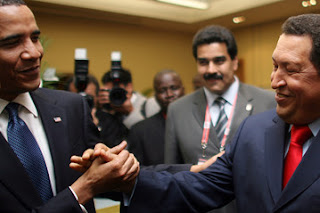 IOW: MORE PROOF THAT SOCIALISM IS THE ROAD TO SERFDOM:


Venezuela is one of the world’s top oil producers at a time of soaring energy prices, yet shortages of staples like milk, meat and toilet paper are a chronic part of life here, often turning grocery shopping into a hit or miss proposition.

... At the heart of the debate is President Hugo Chávez’s socialist-inspired government, which imposes strict price controls that are intended to make a range of foods and other goods more affordable for the poor. They are often the very products that are the hardest to find.

“Venezuela is too rich a country to have this,” Nery Reyes, 55, a restaurant worker, said outside a government-subsidized store in the working-class Santa Rosalía neighborhood. “I’m wasting my day here standing in line to buy one chicken and some rice.”
Venezuela was long one of the most prosperous countries in the region, with sophisticated manufacturing, vibrant agriculture and strong businesses, making it hard for many residents to accept such widespread scarcities.

...  many economists call it a classic case of a government causing a problem rather than solving it. Prices are set so low, they say, that companies and producers cannot make a profit. So farmers grow less food, manufacturers cut back production and retailers stock less inventory. Moreover, some of the shortages are in industries, like dairy and coffee, where the government has seized private companies and is now running them, saying it is in the national interest.

AND OBAMA IS  TRYING TO DO THIS HERE.