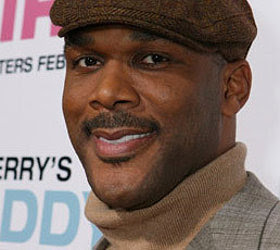 Tyler Perry was pulled over by two white Atlanta Police Officers, because he made a left turn from the right lane.

His security guys taught him this maneuver as a way to know if anyone (Paparazzi? Fans?) is tailing him.

The two cops did knot know who he was, and wondered incredulously, "Who would be following you?"

And then they asked him about his tinted windows.

A black cop then showed up and informed the two white cops of who Tyler Perry was. At which point, the one of the white cops came to him and was "very apologetic."

MLK must have died in vain, if celebrities like Tyler Perry are not yet free to make illegal and unsafe lane changes to avoid paparazzi.

Posted by Pastorius at 9:28 PM