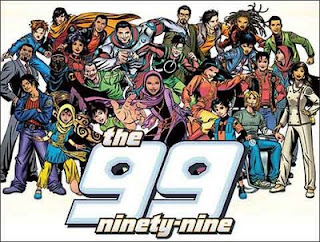 Prof. Daniel Pipes has written about the Kuwaiti-produced comic book "The 99", and provided some more clues to how it's really a propaganda product:


...a closer look reveals the Islamic nature of the comic book. The title, 99, refers to Islam's concept that God has 99 names, each of which appears in the Koran and embodies some attribute of His character: the Merciful, the Compassionate, the Kind, the Most Holy, and the All-Peaceful, but also the Avenger, the Afflicter, and the Causer of Death. [...]

The superheroes are all Muslims (i.e., not Christian, Jewish, Hindu, or Buddhist), some of whom come from Western countries like the United States and Portugal. In contrast, villains are primarily non-Muslims.

At other times he says he devised the series on concluding that "the Arab world needed better role models." He aspired to develop "a new cast of superheroes for the children of the Islamic world" and hoped his work "may well help save a generation" of Muslims. He even thinks his cartoon characters can "salvage Islam's reputation." Indeed, discussion about The 99 stresses its Islamic component. The New York Times notes that its superheroes are "aimed specifically at young Muslim readers and focusing on Muslim virtues." The Times (London) described the series' mission as instilling "old-fashioned Islamic values in Christian, Jewish and atheist children."

Likewise, Barack Obama praised the comic books for having "captured the imagination of so many young people with superheroes who embody the teachings and tolerance of Islam." An Islamic investment bank whose products "fully comply with Shari'ah principles" invested US$15.9 million in Teshkeel and complimented it for "highlighting Islam's rich culture and heritage."

In short, The 99, available in both Arabic and English, contains overtly Islamic content and explicitly promotes Islam. Granted, its Islam has modern aspects, but among non-Muslims the series engages in surreptitious da'wa [Islamic missionary-style work].

Well well. Just another reason why it's a good thing if The Hub network won't be broadcasting that cartoon series based on it. This was what DC Comics was willing to do a since disastrous collaboration on? A really shameful head-shaker. Thanks goodness that "teamup" was the flop it ended up as, and in the end, DC themselves pretty much dumped it out there with little or no fanfare, maybe because they understood it could draw critical fire if they went ahead and promoted it en masse. I'm very glad an expert like Pipes could provide some insight on a subject like this.

RELIAPUNDIT ADDS: I AM SURE THE WHOLE OWS/"99%" MOVEMENT IS RELATED TO THIS, TOO.
Posted by Avi Green at 2:03 PM