TO SOME CONSERVATIVES, NOMINATING SANTORUM IS MORE IMPORTANT THAN DEFEATING OBAMA


[OTB:] ... the Detroit News shows Rick Santorum leading Mitt Romney by four points among likely Michigan primary voters, this depite the fact that Romney clearly beats Santorum in the areas that one would think actually matter to voters:

Romney was four points behind with Santorum even though far more voters believe he’s a better leader than Santorum (38 percent to 15.8 percent) and more likely to beat President Barack Obama (42.2 percent to 18.4 percent).

[VODKAPUNDIT:] It seems even Santorum voters don’t think much of Santorum. If correct, it strengthens the argument that Santorum isn’t much more than the most recent Not-Romney.

A COMMENTER AT VODKAPUNDIT NAILS IT:


There are three segments of voters out there, Stephen.

There are the “not Romneys”, the “un-Romneys” and the “meh-Romneys”.

The “not Romneys” are in kamikaze mode.

They will attack capitalism, the free market, Chris Christie, Ann Coulter, Bob McDonnell, …anything that moves, if it is attached to Romney. They see a “conservative pravda” behind every mild critique (much less criticism) of any “non-Romney” candidate. They see “establishment” money and “RINO’s” beneath every bed and around every corner.

They have anger management issues and are nearly impervious to reason.

The “un-Romneys” want a different candidate, won’t vote for him in the primaries, but would support him in the general. Many of this crowd (estimates up to 60%) are utterly, wholly, completely dissatisfied with the entire slate.

The “meh-Romneys” look at the slate and say he’s got the best chance of an incredibly weak field, they will hold their nose, vote for him and cross their fingers….which is quite a physical feat when you think about it.

You cannot convince the first group about…well, anything. Facts don’t matter. It is raw, unhinged emotion, seething with rage, blind to logic, boiling with revenge. Even though Newt bathed in this acid and destroyed himself, this group wanted to jump in with him with both feet.

They simply are gravitating to the next “non Romney”…the last one standing.

Santorum had virtually no support before the “candidate convenient store” ran out of other non-Romney brands.

He was lucky. He was the least attractive girl in the bar, until closing time. Now, they want to take him home. (Insert your own contraceptive joke here.)

As the non-Romney afterthought, he’s the doggy bag dinner for tomorrow.

“He ain’t much, but he ain’t Romney”. Sounds like a winning slogan to get behind in August.

Me:  ACE NAILED WHEN HE SAID THAT THE "ANYONE BUT MITT CROWD" WOULD RATHER DEFEAT MITT THAN DEFEAT OBAMA"

But when we lose in November... Well, I tried.

AND SO THEY'VE TURNED THE GOP INTO A CIRCULAR FIRING SQUAD. 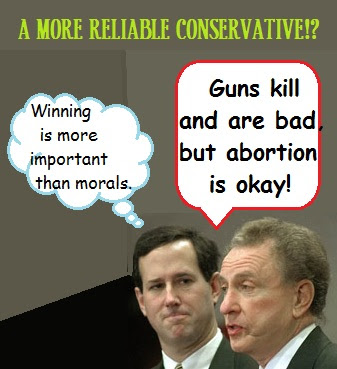 SANTORUM IS A CAREER POLITICIAN WHO HAS DISSED THE TEA PARTY, DISSED LIBERTARIANISM, AND DEFENDED HIS $1BILLION IN EARMARKS - MUCH IF WHICH WENT TO CAMPAIGN DONORS.
SANTORUM HAS NEVER RUN AN ORGANIZATION IN HIS LIFE OR HAD TO BALANCE A BUDGET.

SANTORUM'S VIEWS ON CONTRACEPTION, GAYS, WOMEN IN THE MILITARY - AND HIS WILLINGNESS TO MAKE THEM INTO POLITICAL ISSUES - WILL SCARE OFF THE INDEPENDENTS AND WOMEN VOTERS WE NEED TO DEFEAT OBAMA.

IF DEFEATING OBAMA IS JOB #1, THEN WE NEED TO NOMINATE A PERSON WHO CAN CARRY MORE STATES THAN OBAMA.

THAT MEANS TAKING AWAY A FEW STATES.

ALL SANTORUM WILL DO IS MAKE THE MARGINS IN CONSERVATIVE STATES, WE ARE GONNA WIN ANYHOW, LARGER.

SANTORUM WON'T CARRY NH OR FL OR OH OR WI OR NV OR CO OF MO OR EVEN PA.

TO DEFEAT OBAMA, WE NEED ROMNEY ON THE TOP OF THE TICKET AND JINDAL AS VEEP.
Posted by Reliapundit at 7:02 PM