OBAMA AND HIS COMRADES CONTINUE TO ATTACK GOP AS ANTI-CONTRACEPTION

WE FIRST POSTED ON IT ON JANUARY 7TH AFTER THE STEPHANOPOULAS DEBATE WHEN HE KEPT BADGERING MITT ON THE CONDOM ISSUE: 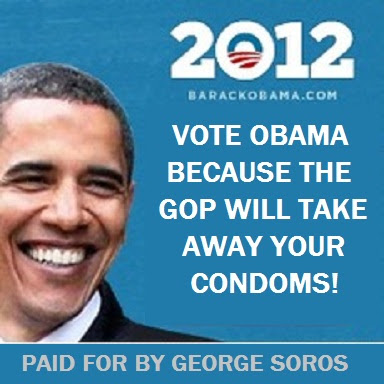 
When the administration announced earlier this month that it would stick to its decision to require religiously-affiliated employers to provide their employees with insurance that covers contraception, the national Catholic reaction was, to put it mildly, less than supportive. All across the country, Catholic bishops wrote and readletters to their flocks that read, “We cannot — we will not — comply with this unjust law.”
Today, a CNSNews.com reporter asked Nancy Pelosi whether she would stand with her fellow Catholics and oppose the law or whether she would stand with the administration and support it. The former Speaker of the House responded with this doozy:

“First of all, I am going to stick with my fellow Catholics in supporting the administration on this. I think it was a very courageous decision that they made, and I support it.”

THEY ARE TRYING TO MAKE AN ISSUE OUT OF THIS  - AND ALL "REPRODUCTIVE CHOICE" ISSUES - BECAUSE THEY THINK IT WILL MOBILIZE THEIR BASE.

THEY WILL FAIL WITH THIS IN 2012 AS MISERABLY AS THEY DID WITH THE "TEA PARTIERS ARE RACISTS" MEME IN 2010.

Posted by Reliapundit at 7:36 PM