IS IRAN ABOUT TO TEST A NUCLEAR BOMB?

Khamenei then claimed the current century as the century of Islam and promised that human history is on the verge of a great event and that soon the world will realize the power of Allah.

IMHO: THE ONLY THING THAT THIS COULD BE IS EITHER A TEST OF A NUKE OR THE USE OF A NUKE. 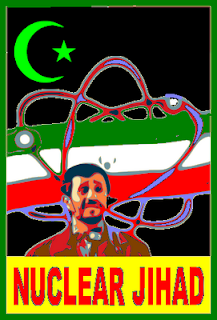 Here's what I suspect: the Iranians bought a North Korean nuclear bomb and plan to explode it underground and then claim it was one of theirs and thereby win deterrence.
Posted by Reliapundit at 6:09 PM

Hi.
Yes there's a good chance you are right on this one , i for one wouldn't be surprised.
Last year the Former Mossad chief warned for the possibilty of Iran obtaining a nuclear weapon in 2012.
One thing that struck me was that the Fodow plant can hold maximum 3.000 centrifuges that's not enough to provide nuclear fuel for a nuclear plant, but perfect for nuclear weapons.

here's what i suspect:

they bought a noko one and plan to explodes it underground and then claim it was one of theirs and hereby win deterrence.