HIS STORY WAS TOO GOOD TO CHECK: 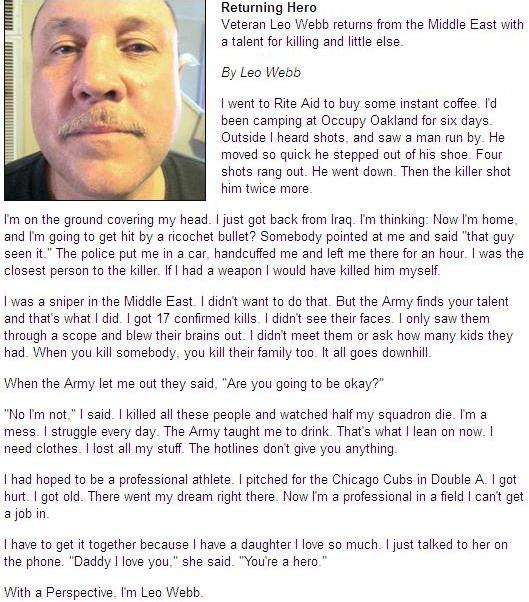 BUT NOW HE HAS BEEN EXPOSED AND THE STORY RETRACTED BY APR'S MARKETPLACE:


Editor’s Note: A commentary by Leo Webb, ”Returning veteran has few marketable skills,” prompted questions from listeners about Webb’s account of his service as an Army sniper in Iraq. A subsequent investigation found that the Army has no record of Webb. Webb also said he pitched for a Chicago Cubs minor-league team. Inquiries to the Cubs and to Minor League Baseball found no record of Webb. Marketplace has an obligation to provide accurate information. That was not met in this commentary. It has been retracted and the text and audio have been removed from the web site.

THE LEFTIST DOMINATED LEGACY MEDIA HATES THE MILITARY AND VETERANS AND ARE OFTEN DUPES FOR LEFTIST SCUM WHO POSE  AS VETERANS IN ORDER TO LANDER THE MILITARY.

THIS HAPPENS A LOT BECAUSE THE LEFTISTS DOMINATING THE LEGACY MEDIA HAVE MANY BIASES LIKE THIS, AND OFTEN RUN STORIES THAT ARE TOO GOOD TO CHECK FROM THEIR POV, AND OFTEN TURN OUT TO BE TOTAL BS.

THAT'S WHY YOU SHOULD ALWAYS DOUBLE-CHECK ANYTHING YOU READ ABOUT IN THE LEGACY MEDIA THAT PERFECTLY ILLUSTRATES WHY ANY PART OF LEFTIST IDEOLOGY OR LEFT-WING POLICIES ARE GOOD.

IF THEY SHOW LEFTISM WORKS, THEN THEY'RE PROBABLY BASED ON A SACKFUL OF LIES AND DISTORTIONS.
Posted by Reliapundit at 7:20 PM