The Death of the Individual 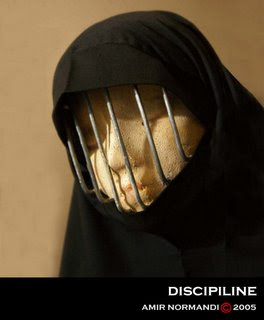 A very important essay from David Solway at PJM:


The displacement of the “individual” as a primary category of social and political thought — a distinctly observable trend in the contemporary West — is an infallible sign of civilizational despair.

The nexus of causes and factors accounting for this undeniable phenomenon has been analyzed in many different ways and from many different perspectives: the draining of confidence in the “Western enterprise” after two world wars and the devastation of the generations; the natural tendency of a successful civilization to grow tired and lazy in the course of aeonian time, as Oswald Spengler and Arnold Toynbee argued in their major works; the loss of religious conviction and its attendant moral armature, leading to rootless insecurity and lack of transcendent purpose; the attenuation of historical memory — what I have elsewhere called the chronosectomy — owing to a dumbed-down education paradigm and the consequent onset of a present-oriented hedonism.

Perhaps all of these factors are coterminous and work together against the sense of individual responsibility for self, family, and nation. But whatever may explain our predicament, there can be little doubt that, despite all our technical advances, we are experiencing something like the advent of a new Dark Age.

Erich Fromm has furnished the definitive study of the process of self-abdication in his Escape from Freedom, which convincingly accounts for the dynamic of moral and individual surrender to the collective mind. According to Fromm, the identification with authoritarianism is a “mechanism of escape” from a feeling of personal insecurity and weakness. The “severed” personality attempts to overcome so crippling a condition by choosing to “give up his freedom” as a way of “eliminating the gap” between his individual self and the world he cannot come to terms with or enter as a productive participant.

The lamentable result is “the more or less complete surrender of individuality and the integrity of the self.” And the choice is paid for “by a kind of life that often consists only of automatic or compulsive activities,” another way of describing the totalitarian nightmare.

Fromm focuses on the psychology of Nazism to better clarify the structure of the totalitarian personality. It is typified by a deep intuition of lack, of insignificance and deficiency. Two of the factors that tend to predominate are a slavish admiration of power and the accusation of the Jews as a “race” that desires mastery over others. The contradiction is rarely noticed: power is to be sought as a good on the one hand, condemned as an evil on the other. 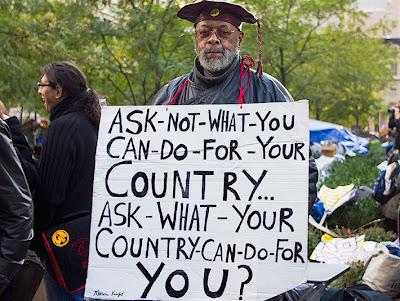 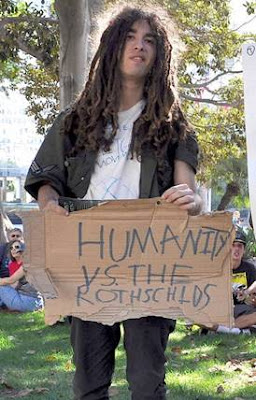 Posted by Pastorius at 9:55 AM

The guy in the first pic has the JFK quote all backwards. But what can you expect from the OWS whiners with an entitlement mentality!!!

Hi Pasto.
Very interesting theory.I have a tendency to agree with a lot of it.
PS: Nice to see you here!:)

Hi Pasto.
Very interesting theory.I have a tendency to agree with a lot of it.
PS: Nice to see you here!:)

Thanks, Will. I've been here a long time. But, you probably know that.