YOUR TAX DOLLARS AT WORK 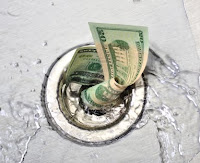 Reuters' Caren Bohan (via Weasel Zippers) alerts us to another judicious use of taxpayer dollars: employing Air Force One to fly a bunch of overfed union bosses to a Labor Day rally in Detroit. These are the same lugs who feed at the troth of the taxpayer and then declare all-out-war on us "sons-of-bitches".

And the mainstream media remain silent, with the result that most Americans don't know just how hideous the level of corruption under the Obama administration, an administration that harps on "shared sacrifice."

America has become an oligarchy.
Posted by Always On Watch at 6:19 AM

Obama has done what many thought was impossible. He has brought much more than the usual share of baseness and depravity to the machinations of our Government. The corruption is many sided and far reaching but it all starts with him. The quality of the man is seen first in the little things.
It is conspicuous in his personal rapacious attitude toward the perks of the presidency. When he is not perverting and misusing those perks, he and the First Lady are grabbing all they can get regardless of what people in the rest of country are suffering.
His moral hollowness has spread with his appointments to all the government agencies.
We have a State Department that insults and attacks the victim (Israel) while upholding the enemies of the USA.
We have an unjust Justice Department that thinks it is charge of Affirmative Action and attacking political targets.
We have crony-ism, graft and corruption throughout the Federal System as Obama uses the government to reward his friends and punish his enemies.
The stench Obama has brought to Washington is spreading through out the country and rising to the heavens.
Come 2012, Washington will need many long hot showers with several cleansing enemas!

I just posted it at my web site as "Quote of the Day."