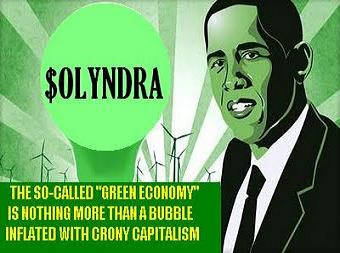 SOLYNDRA AIN'T THE ONLY ONE: Another "Green" Company Goes Belly Up in the Age of Obama

This time in the land of liberals, Taxachusetts. Evergreen Solar Inc., the Massachusetts clean-energy company that received millions in state subsidies from the Patrick administration for an ill-fated Bay State factory, has filed for bankruptcy, listing $485.6 million in debt.

Evergreen, which closed its taxpayer-supported Devens factory in March and cut 800 jobs, has been trying to rework its debt for months. The cash-strapped company announced today has sought a reorganization in U.S. Bankruptcy Court in Delaware and reached a deal with certain note holders to restructure its debt and auction off assets.

Getting a sense of déjà vu yet? Just last month, we heard that an electric car company in Salinas padlocked their doors after half a million dollars from state and local governments.

A month before that, electric car company Think Global AS filed for bankruptcy, too.

Think Global AS plans to liquidate its assets, according to a statement from its exclusive battery supplier, Ener1 Inc.

Ener1, which engineers and makes its batteries in the Indianapolis area at its EnerDel subsidiary, notified investors Wednesday that the company would take a charge of more than $32 million on unpaid loans and accounts receivable from Think Global.

Green cars, batteries for green cars, solar panels...all the industries that people like Obama tout as the hope for American and for jobs seems to be illusory at best. Particularly, after the public money runs out.

THE GREEN ECONOMY IS TFBS - JUST LIKE THE AGW CRAP IT'S BASED ON.

FROM ITS INCEPTION, CLIMATE CHANGE WAS A LEFTIST SCHEME DESIGNED TO HOBBLE INDUSTRY AND HERALD SOCIALISM.

(MORE ON THE LEFTIST TROJAN HORSE CALLED THE IPCC HERE.)

HERE'S WHAT THE LEFT'S CLIMATE CHANGE HOAX HAS ACTUALLY ACCOMPLISHED:
IT'S BEEN THE THIRD MOST HARMFUL IDEOLOGY IN THE HISTORY IF HUMANITY - AFTER ISLAMISM AND SOCIALISM ITSELF.

WE NEED TO SMASH THE FUNDING FOR ALL "GREEN ECONOMY" COMPANIES AND CO2PHOBIC ORGANIZATIONS...

AND ALL THEIR SUBSIDIES, TOO...

AND CONTINUE TO DEMOLISH THE SO-CALLED SCIENTIFIC BASIS FOR ITS ATTACK ON C02 - A BENIGN GAS.

COMPLETE ROUND UP HERE AT MEMEORANDUM.