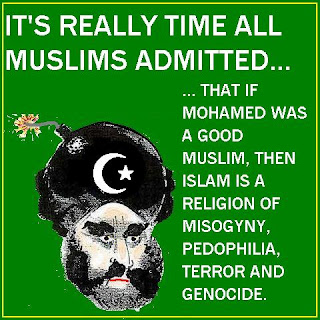 The ROP strategy is simple: call Islam the ROP in an effort to isolate the radical/militant elements.

It is doomed to fail because the so-called radical/militant elements are not apostates; they are the true muslims following true islam - the islam of Mohamed.

The so-called muslim moderates are the true apostates.

IOW: if the salafists and wahhabists and the binladenists are apostates, then Mohamed had to be an apostate, and muslims can't believe that and remain muslims.

Muslims revere Mohamed and can't be lured by the West to reject those who emulate him.

Instead of making this disingenuous argument - that islam is at its core a ROP and the islamists apostates - we should be arguing the truth: that Mohamed was and his creed is evil, martial misogynistic, pedophilic and genocidal, and always have been.

And that muslims must leave islam if they reject Binladenism and Salafism and Wahhabism.

Posted by Reliapundit at 5:31 PM

This is the best I have ever seen in a public speaking forum. It's great.

She's absolutely wrong when she says (in defending her attacks on Rick Perry), "It's so bad we could get Mickey Mouse into the White House right now."

Yeah, good luck with that.

she's right: right now anyone can beat him.

she is echoing mark levin on this.