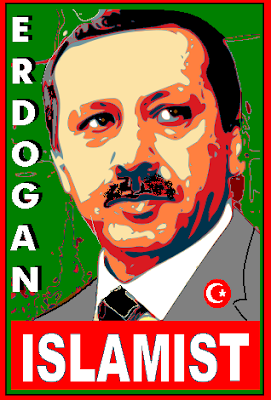 It was he who sent the "peace flotilla" to challenge Israel's right to blockade Gaza (recognized under international law and explicitly by the U.N.). He made the inevitable violent result of that adventure into an anti-Israeli cause célèbre. He has now announced that the next peace flotilla will be accompanied by the Turkish navy.

This will put Israel in the position of either surrendering its right to defend itself, or firing on Turkish naval vessels. There is no way to overstate the gravity of this: Erdogan is manoeuvring to create a casus belli.

WE'VE BEEN SAYING THAT TURKEY SHOULD BE THROWN OUT OF NATO FOR OVER A YEAR - 9SCROLL DOWN).

AND NOW I WILL ADD THIS:

ISRAEL SHOULD REPLACE TURKEY AND BECOME A PART OF NATO.

THROW TURKEY OUT AND ADMIT ISRAEL.

ERDOGAN WOULDN'T ATTACK ISRAEL IF HE KNEW IT WOULD BRING NATO DOWN ON TURKEY.
Posted by Reliapundit at 5:59 PM

I couldn't agree more, just add: Put the RocketShield in Bulgaria.
And WHAT is Obama his role in this.