One hallmark of Homo erectus, a forerunner of modern humans, was his stone tools, an advanced technology reflecting a good deal of forethought and dexterity. Up to now, however, scientists have been unable to pin a firm date on the earliest known evidence for his stone tool-making. 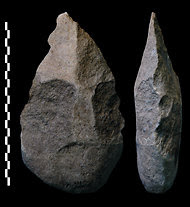 This large crude handaxe, seen here at a side and front view, is believed to have been created about 1.76 million years ago.

A new geological study, being reported Thursday in the journal Nature, showed that tools from a site near Lake Turkana in Kenya were made about 1.76 million years ago, the earliest of their ilk found so far. Previous dates were estimates ranging from 1.4 million to 1.6 million years ago.

IT ONLY TOOK MANKIND 1.8 MILLION YEARS TO GO FROM THAT TO THIS: 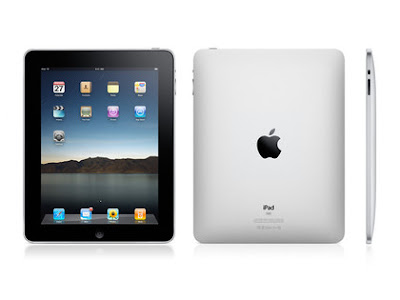 IF JIHADISTS WIN WW4, WE MIGHT SOON BE USING MORE OF THE FORMER THAN THE LATTER!

JIHADO-THUGS CAN DESTROY THINGS, BUT THEY'RE NOT VERY GOOD AT ANYTHING CONSTRUCTIVE.

Posted by Reliapundit at 6:52 PM

Imagine; going from that beautiful artifact to Obummer the Kenyan mozlem in 1.8 million years! We are definitely on the road to perdition!!