Neanderthals mated with early humans, according to research. Photo: BBC

Interbreeding between the two species between 65,000 and 90,000 years ago... It was established last year that a small part of the human genome can be traced back to Neanderthals.

Here's a descendent of this inter-breeding who herself also mated with a half-breed: 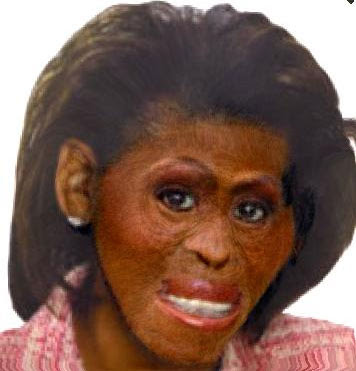 Yeah I know it's nasty, but it's not racist: they did it too Bush: 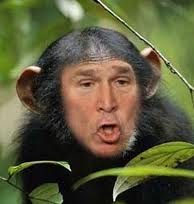 MEMO TO "HOLIER THAN THOU ED MORRISSEY" ONE OF THE BLOWHARDS AT HOT AIR:

IS BARRY HUSSEIN SOETORO OBAMA JUNIOR A HALF-BREED, OR A HYBRID?

BASED ON THE RESULTS SO FAR, I'D SAY HALF-BREED.

AND BEFORE SQUEAMISH MODERATES LIKE ED JUMP IN AND ACCUSE ME OF COMMITTING ANOTHER SLUR, EVEN OBAMA HAS CALLED HIMSELF A MUTT.

This is one of the most disgusting, degraded pieces of racist trash that I have ever seen. I don't know who you are, but you should be deeply ashamed of yourself.

Sad to say, you have so given yourself over to the lowest of human emotions that I know it will never happen. You are one contemptible specimen of life.

YOU ARE AN ASSHOLE GREEN EAGLE.

I AM NO RACIST.

I WAS A MEMBER OF MY COLLEGE'S AFRICAN AMERICAN CONGRESS.

I HAVE HAD BLACK FRIENDS MY WHOLE LIFE.

I HAVE PHOTOS AND PAINTINGS OF AN BY BLACK PEOPLE IN MY HOME.

I ADORE AFRICAN AMERICAN CULTURAL ICONS LIKE BASIE AND ELLINGTON AND NAT COLE AND SO MANY OTHERS.


I DON'T HAVE A RACIST CELL IN MY BODY.

SO FUCK OFF YOU LITTLE MORONIC PIECE OF LEFTIST SHIT.