MY RECORD ON VIOLENCE AGAINST INNOCENT MUSLIMS IS CLEAR:

WE ARE IN A CIVILIZATIONAL STRUGGLE AGAINST ISLAM.

THE SOONER A MAJORITY OF US ACCEPT THIS THE BETTER. THE FAILURE TO ACCEPT THIS HAS LEAD US TO WASTE TIME AND TREASURE ON TACTICS AND STRATEGIES THAT CANNOT HELP US WIN - LIKE "DEMOCRATIZING" AFGHANISTAN, A GOAL I ONCE SHARED.

CRUSHING Nazism didn't mean exterminating all Nazis or Germans; it did mean eradicating Nazism and bringing the worst perpetrators of Nazi atrocities to justice - summary or military.

Or we will lose.

MY RECORD ON THIS IS CLEAR.

THERE IS NO PLACE FOR THE KILLING OF INNOCENTS - OR FOR ANY EXTRA-JUDICIAL OR EXTRA-MARTIAL KILLING.
ANYONE WHO TRIES TO TIE THIS BLOG OR MY VIEWS TO THIS HORRIFIC ACT IN OSLO OR THIS PSYCHOTIC MASS MURDERER BREIVIK IS SCUM.

HAVING THIS BLOG AND ARGUING THESE POINTS PROVES THAT I BELIEVE THAT WE NEED TO WAGE A NON-VIOLENT WAR OF IDEAS, AND CONVERT INNOCENT PEOPLE WHO HAVE EVIL CREEDS - NOT USE VIOLENCE AND KILL THEM.

I did not assume this was an act of islamo-terrorism. I accepted the first reports that islamists had taken credit for it at face value. This blog's first post on it posed it as a question, and only after an islamist group took credit did we jump on the bandwagon. We regret it.

Muslim fundamentalists took credit for it - and we believed them, but the Norwegian cops say that they've caught the camp shooter and can tie him to the bombing.

He is reportedly describes himself as a conservative Christian and nationalist. 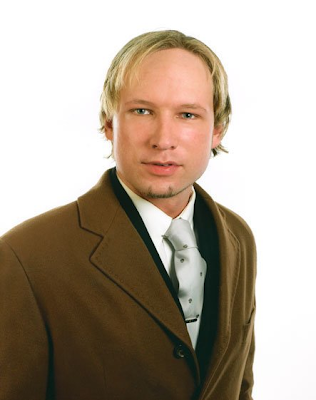 Breivik had set up his own business, Breivik Geofarm, and a month ago had started to run an organic farm in Hedmark in eastern Norway. There he reportedly produced and stored fertilizers that he was able to use in explosives.

He was known to be active on the internet, expressing extremist Islamophobic views on forums and criticizing immigration policies.

He recently claimed that politics today was not about socialism vs. capitalism but nationalism vs. internationalism. He argued on a Swedish news website that the media were not critical enough about Islam and claimed that Geert Wilders' Party for Freedom in the Netherlands was the only "true" party of conservatives.

He argued that socialism was breaking down traditions, culture, national identity and other societal structures and that this in turn made society weak and confused.

He claimed to be well-read and worshiped the Norwegian World War II hero Max Manus. On his Facebook profile he listed his favorite books as "The Trial" by Franz Kafka and "Nineteen Eighty-Four" by George Orwell and his favorite television show as "Dexter," a series about a Miami police forensics expert who moonlights as a serial killer of criminals whom he believes have escaped justice.

I THINK MAYBE THERE'S A POSSIBILITY THAT THIS BREIVIK IS ACTUALLY A PSYCHOTIC LEFTIST WHO DID THIS HORRIFYING ACT TO DISCREDIT THE RIGHT.

DO YOU THINK THIS IS TOO WEIRD TO BE TRUE!?!? BELIEVE THAT IT COULD NEVER HAPPEN!??

ER UM...IT DID BEFORE - IN NYC: AT FIRST THEY TRIED TO BLAME THE RIGHT:

Authorities say a New York City cab driver is recovering after being brutally stabbed by a passenger who first demanded, "Are you Muslim?"

The attacks occurred as New York is in the midst of a contentious debate over plans to build an Islamic community center and mosque a few blocks from the site of the former World Trade Center.

"I think this clearly demonstrates that hate speech often leads to hate crime when you have the constant vilification of Islam and Muslims on talk radio, in newspapers, on cable news and on the Internet," Ibrahim Hooper, national communications director for the Council on American-Islamic Relations, told AOL News.

Police said Ahmed Sharif, 43, of the borough of Queens was driving his taxi on Manhattan's East Side Monday night when he was hailed by a pedestrian on the street. Roughly one block from his destination, the passenger, identified as 21-year-old Michael Enright, of Brewster in upstate New York, allegedly asked Sharif, "Are you Muslim?" When Sharif said yes, Enright pulled out a knife and slashed Sharif in the neck, face and shoulders, police said.

Despite his injuries, Sharif was able to lock the attacker in the back of the cab and call for help. The suspect managed to get out of the vehicle, but police quickly located him and took him into custody.

ONLY ENRIGHT TURNED OUT TO BE A LEFTIST IN FAVOR OF THE GROUND ZERO MOSQUE.

MORE FROM POLITICO AT THE TIME:

The apparent anti-Muslim assault on a New York city cabbie by a man shouting “Assalamu Alaikum. Consider this a checkpoint" produced an immediate round of recriminations over its connection to opposition to a New York Islamic Center and an apparent rising tide of Islamophobia.

But as often at the intersection of politics and violent crime, the story doesn't appear to fit any easy stereotype: The alleged assailant, Michael Enright, is — according to his Facebook profile and the website of the left-leaning media organization Intersections International — a student at the School of Visual Arts and a volunteer for Intersections, which recently produced a statement of support for the Park51 project and is funded by the mainstream, liberal Collegiate Church of New York.

I think there's a good chance that Breivik will turn out to be another Enright.

Stay tuned.
Posted by Reliapundit at 12:00 AM

How did one man manage to shoot and kill 80 people?

Did he have a machine gun?

the campers and their chaperones were unarmed.

they and their chaperones should have been armed, too.

They were armed with their vaginas. That's clear.

THIS GUY CLAIMED TO BE A CHRISTIAN WHO HATED ISLAM, BUT THEN: WHY DIDN;'T HE ATTACK A MOSQUE!?

HIS TARGETS WERE PSYCHOTIC.

It sure will be interesting to watch the news on this come out in the next few days.

BY the way, according to the Norwegian Wiki on this guy, his company, the one he owned and ran himself, had 790 employees.

That's a lot of employees for a guy who is just a fucking nut.

This guy must have been brilliant to deal with 790 employees, plus 790 voices in his head.

"THIS GUY CLAIMED TO BE A CHRISTIAN WHO HATED ISLAM, BUT THEN: WHY DIDN;'T HE ATTACK A MOSQUE!?"

Are you saying that it would have been alright if only he killed innocent people of another religion?!

i have never advocated killing muslims.

i have never advocated the killing of innocents.

i have several posts on this.

we eradicated nazism from germany without killing all germans.

we did not kill all german troops.

we didn't even kill all nazis.

one of the things i hate about islamism is that it routinely uses coercion to get people to do what they want and even to convert people to islam.

in a war, it is okay to kill the enemy combatants. and it is inevitable that there be collateral damage.

that is not murder.

the Bible says THOU SHALT NOT MURDER, but is filled with examples of justified killing.

the Bible also rules out forcing people to convert.
islamism is filed with it. i think it's one of the features of islasm that prove it to be an evil creed.

that's evil. even nazis didn't have such a rule.

so i would never argue - and have never argued - that we have to kill or coerce muslims into leaving islam or that we should target innocent muslims. and the overwhelming majority of muslims in the world are innocent..

i want them converted and i believe that this has to be done out of their free will.

juist as i favor converting leftists.

you cannot convert leftists or islamists with coercion.

you can with arguments -

AND THAT IS WHAT THIS BLOG IS ABOUT.

i have always only advocated the use of violence - going "kinetic" - in that theater of war or after a jurisprudential proceeding.

i do endorse the killing the enemy and also executing those convicted of horrendous crimes like the one breivik committed.

do you think he should get the death penalty?

we eradicated nazism from germany without killing all germans.

we did not kill all german troops.

we didn't even kill all nazis.

WE CAN AND SHOULD FIGHT ISLAMISM THE SAME WAY.

CRUSHING Nazism didn't mean exterminating all Nazis or Germans; it did mean eradicating Nazism and bringing the worst perpetraors of Nazi atrocities to justice - summary or military.

Or we will lose.

WE ARE IN A CIVILIZATIONAL STRUGGLE AGAINST ISLAM.

THE SOONER A MAJORITY OF US ACCEPT THIS THE BETTER. THE FAILURE TO ACCEPT THIS HAS LEAD US TO WASTE TIME AND TREASURE ON TACTICS AND STRATEGIES THAT CANNOT HELP US WIN - LIKE "DEMOCRATIZING" AFGHANISTAN, A GOAL I ONCE SHARED.

"We didn't even kill all nazis."

And no one died at the holocaust either right?

I've got you pegged as a far right-wing fascist Nazi sympathizer and I'll bet I'm not far off the mark.

you can with arguments -

AND THAT IS WHAT THIS BLOG IS ABOUT.

That's another lie, you screen only favorable comment, you can't take dissent in real life.

U R A FUCKING MORON.


AND WE DIDN'T KILL ALL THE NAZIS.

NAZIS COMPRISED AT LEAST 45% OF THE GERMAN POPULATION.

WE DIDN'T EVEN EXECUTE ALL NAZI MILITARY. NOT EVEN ALL THEIR LEADERS.


WE CERTAINLY DIDNL;T KILL ALL GERMANS.

WE SAVED THEM FROM NAZISM TOO.

AND THEY ARE STILL MAKING SURE NAZISM CAN;T COME BACK.

you screen only favorable comment, you can't take dissent in real life.

ER UM... I POSTED YOU'RE IDIOTIC CRAP U FUCKING MORON.

You don't play well with other do you?

And what's with the all caps?

OMG you're are such an awesome debater.

I'll bet a tough guy like you gets into a lot of bar fights, yes?

Do you talk to your wife and kids like that?

Hey sorry your intolerant, bigoted anti-Muslim post when bad... it looked like you put a lot of thought into it lol.

You don't play well with other do you?

And what's with the all caps?

GUESS NOT SINCE I USE ALL CAPS A LOT AND I AM NOT CRAZY.

OMG you're are such an awesome debater.

I POSTED AND COMMENTED A LOT MORE THAN THAT.

DAVE IS AVOIDING THE GIST.

OF COURSE HE ISN;T SORRY.

HE AND THE LEFT ARE GLEEFUL.