MASSIVE STORM ON SATURN - CAUSED BY THE SUN 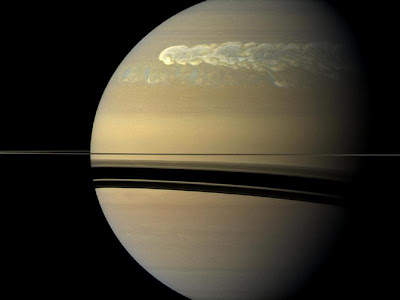 Scientists analyzing data from NASA's Cassini spacecraft now have the first-ever, up-close details of a Saturn storm that is eight times the surface area of Earth.

On Dec. 5, 2010, Cassini first detected the storm that has been raging ever since. It appears approximately 35 degrees north latitude of Saturn. Pictures from Cassini's imaging cameras show the storm wrapping around the entire planet covering approximately 2 billion square miles (4 billion square kilometers).

THEY CAN'T BLAME BUSH OR CO2 FOR THIS FOR THIS, CAN THEY? NOPE. IT'S THE SUN STUPID:

"This storm is thrilling because it shows how shifting seasons and solar illumination can dramatically stir up the weather on Saturn," said Georg Fischer, the paper's lead author and a radio and plasma wave science team member at the Austrian Academy of Sciences in Graz.

ER... UM, IF THE SUN CAN DO THIS ON SDATURN, THEN DO YOU THINK IT MIGHT EFFECT WEATHER AND CLIMATE HEE ON EARTH!?

WHAT CAUSES CLIMATE CHANGE HERE ON EARTH? IT'S THE SUN (AND OCEAN OSCILLATIONS) , NOT THE CO2, STUPID.
Posted by Reliapundit at 5:40 PM