Pfc Naser Abdo, 21, was arrested in the town of Killeen near the Fort Hood US army base and had been planning to target military personnel, police said.

The Muslim infantry soldier was granted conscientious objector status last year because of his religious beliefs.

[He ] is currently being held on an unrelated child pornography charge in Killeen, refused to deploy to Iraq and Afghanistan from Fort Campbell military base in Kentucky before going missing, FBI agent Eric Vasys said.

The Texas native was granted conscientious objector status in May 2011 after he said his religious beliefs would prevent him fighting in any war. 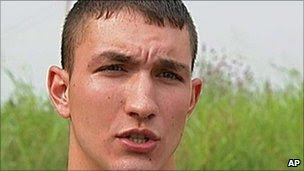 THIS IS THE FACE AND
THE PROFILE OF THE ENEMY.

BTW: THE PORNOGRAPHY CHARGES ARE NOT "UNRELATED".

ISLAMISTS ARE VERY F*CKED UP PEOPLE AND THEIR SICK SEXUAL PREFERENCES ARE LINKED TO THEIR ISLAMO-MISOGYNY WHICH IS AN INTEGRAL PART OF THEIR FAITH.
Posted by Reliapundit at 8:13 PM