MORE "THE WORLD IS ENDING CRAP" FROM TOM FRIEDMAN:

You really do have to wonder whether a few years from now we’ll look back at the first decade of the 21st century — when food prices spiked, energy prices soared, world population surged, tornados plowed through cities, floods and droughts set records, populations were displaced and governments were threatened by the confluence of it all — and ask ourselves: What were we thinking? How did we not panic when the evidence was so obvious that we’d crossed some growth/climate/natural resource/population redlines all at once?

“The only answer can be denial,” argues Paul Gilding, the veteran Australian environmentalist-entrepreneur, who described this moment in a new book called “The Great Disruption: Why the Climate Crisis Will Bring On the End of Shopping and the Birth of a New World.” “When you are surrounded by something so big that requires you to change everything about the way you think and see the world, then denial is the natural response. But the longer we wait, the bigger the response required.”

Gilding cites the work of the Global Footprint Network, an alliance of scientists, which calculates how many “planet Earths” we need to sustain our current growth rates. G.F.N. measures how much land and water area we need to produce the resources we consume and absorb our waste, using prevailing technology. On the whole, says G.F.N., we are currently growing at a rate that is using up the Earth’s resources far faster than they can be sustainably replenished, so we are eating into the future. Right now, global growth is using about 1.5 Earths. “Having only one planet makes this a rather significant problem,” says Gilding.

This is not science fiction. This is what happens when our system of growth and the system of nature hit the wall at once. While in Yemen last year, I saw a tanker truck delivering water in the capital, Sana. Why? Because Sana could be the first big city in the world to run out of water, within a decade. That is what happens when one generation in one country lives at 150 percent of sustainable capacity.

“If you cut down more trees than you grow, you run out of trees,” writes Gilding. “If you put additional nitrogen into a water system, you change the type and quantity of life that water can support. If you thicken the Earth’s CO2 blanket, the Earth gets warmer. If you do all these and many more things at once, you change the way the whole system of planet Earth behaves, with social, economic, and life support impacts. This is not speculation; this is high school science.”

It is also current affairs. “In China’s thousands of years of civilization, the conflict between humankind and nature has never been as serious as it is today,” China’s environment minister, Zhou Shengxian, said recently. “The depletion, deterioration and exhaustion of resources and the worsening ecological environment have become bottlenecks and grave impediments to the nation’s economic and social development.” What China’s minister is telling us, says Gilding, is that “the Earth is full. We are now using so many resources and putting out so much waste into the Earth that we have reached some kind of limit, given current technologies. The economy is going to have to get smaller in terms of physical impact.”

We will not change systems, though, without a crisis. But don’t worry, we’re getting there.

THE LEFT HAS BEEN SAYING THIS SHIT SINCE 1968:

Ehrlich is a biologist whose specialization is butterflies. But for 27 years he has promoted himself an expert on ecology and human population. And what are his feelings about human population? He loathes it. The opening page of The Population Bomb (1968) made that memorably clear:

All those yucky people, deplored Ehrlich in The Population Bomb, have ruined the world. Result? Apocalypse now: 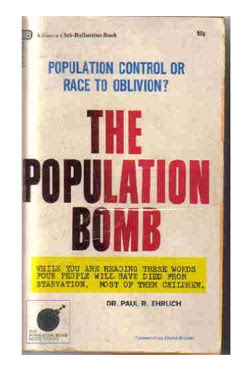 "The battle to feed all of humanity is over. In the 1970s, the world will undergo famines -- hundreds of millions of people are going to starve to death in spite of any crash programs embarked upon now. At this late date, nothing can prevent a substantial increase in the world death rate."

A year later Ehrlich claimed that "most of the people who are going to die in the greatest cataclysm in the history of man have already been born." By 1975, he expected, "food shortages will have escalated the present level of world hunger and starvation into famines of unbelievable proportions." He amended his prediction in 1978, perhaps noticing that he and his neighbors were still alive. Those hundreds of millions of people would be starving to death in the 1980s, not the 1970s, he said. Sorry for the delay.

Meanwhile, as Ehrlich awaited -- awaits -- what he called "the Great Die-Off," people's lives kept improving. The world death rate in 1965, measured in deaths per thousand, was approximately 16.4. By 1990 it had dropped to 10. The steepest declines were in Africa, South America and Asia, the regions Ehrlich had predicted would suffer most.

Worldwide, infant mortality keeps declining. Life expectancy keeps stretching. The average human being is better nourished today than at any time in history. Famine due to natural causes (i.e., not caused by civil war or dictatorships) has almost been eradicated. The number of people affected by starvation has been falling for decades. It is one-10th what it was a century ago, even though the world's population has quadrupled.

To convey the full scope of Ehrlich's false predictions would consume this whole page. But here's a small sample. Ehrlich forecast:

The list goes on and on and on, lengthening with each book. Ehrlich rarely admits that his prophecies have failed. He just replaces them with new ones. Ehrlich's 1990 book "The Population Explosion," co-authored with his wife Anne, offers this vision:

"One thing seems safe to predict: Starvation and epidemic disease will raise the death rates over most of the planet . . . enormous rise in the death rates . . . deaths of many hundreds of millions of people in famines . . . nuclear terrorism . . . epidemics, water shortages . . . local disasters . . . food riots or epidemics leading to a breakdown of transport systems . . . collapse of civilization."

WE HAVE NEVER RUN OUT OF RESOURCES.

THE HISTORY OF HUMAN ECONOMY IS THIS:

ONE OLD LESS-EFFICIENT RESOURCE IS REPLACED BY A NEW MORE EFFICIENT ONE.

MORE PEOPLE - AND A HIGHER PERCENTAGE OF PEOPLE - ARE LIVING LONGER HEALTHIER MORE PROSPEROUS LIVES NOW THAN AT ANYTIME IN ALL OF HUMAN HISTORY.

THIS CARTOON SAYS IT ALL:

THE ONLY FREAKING THING THAT STANDS IN THE WAY OF ENDING POVERTY IS SOCIALISM. (LEFTISM. LEFTIST POLICES.)

CHINA BECAME AN ECONOMIC POWERHOUSE WHEN THEY BECAME A FREER MARKET.

CUBA, NORTH KOREA, ZIMBABWE ARE ALL POOR AS A RESULT OF LEFTISM.

THE USSR - THE UNION OF S-O-C-I-A-L-I-S-T SOVIET REPUBLICS WAS POOR; RUSSIA IS RICH.

ALL BETTER OFF WITHOUT LEFTIST POLICIES.

WHICH IS WHY IS HAVE LONG SAID:

"IF WE WANT TO MAKE POVERTY HISTORY,
THEN WE HAVE TO MAKE LEFTISM HISTORY."
AND WE NEED TO CONSIGN AGW AND MAN-MADE CLIMATE CHANGE TO THE SAME DUSTBIN AS MARXISM.

IF WE COULD, THEN ENERGY PRICES WOULD COME DOWN AND SO WOULD THE PRICES OF FOOD AND ALL MANUFACTURED AND SHIPPED PRODUCTS.

THAT WOULD DO MORE FOR POOR PEOPLE THAN ALL THE WELFARE PROGRAMS IN ALL OF HUMAN HISTORY COMBINED.

THE PROBLEM ISN'T THAT THERE ARE TOO MANY PEOPLE.

THE PROBLEM IS THAT THERE ARE TOO MANY LEFTISTS -
MEANING THERE ARE TOO PEOPLE BELIEVE THE LEFTIST CRAP THAT IDIOTS LIKE FRIEDMAN SPOUT.

THEY NEED TO HAVE THEIR EYES OPENED.

IT'S POSSIBLE: I WAS ONCE A LEFTIST.
Posted by Reliapundit at 5:58 PM

we have twice as many people now as 30 yrs ago and most live better.

i see no reason why it won't continue - except for leftism.

therefore we are not running out of anything - just shifting the chemistry...