See this essay by Dr. Andrew Bostom. As usual, Dr. Bostom's work is erudite. In his essay, he shows that mosques are more than places of worship; rather, they are barracks.

Of course, those of us informed as to Islam's various methods of Islamic supremacism are not surprised by the above contention.

But there are a few "surprises" in the essay. One of those "surprises," yet another of America's Presidents who understood the threat of jihad: 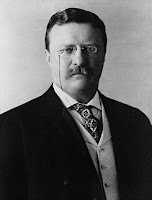 ...[Theodore] Roosevelt offered this historical perspective in 1916 on the consequences for Western civilization of succeeding, or failing to repel jihad conquerors:

The civilization of Europe, America, and Australia exists today at all only because of the victories of civilized man over the enemies of civilization…[including] those of Charles Martel in the 8th century [over Arab jihadists] and those of John Sobieski in the 17th century [over Ottoman Turkish jihadists]. During the thousand years that included the careers of the Frankish soldier [Martel] and the Polish king [Sobieski], the Christians of Asia and Africa proved unable to wage successful war with the Moslem conquerors; and in consequence Christianity practically vanished from the two continents; and today nobody can find in them any ‘social values’ whatever, in the sense in which we use the words, so far as the sphere of Mohammedan influence [is]…concerned.”...

How few history textbooks today present this perspective - even though most history texts laud Theodore Roosevelt for his promotion of conservationism with his setting aside land for nature preserves and national parks.
Posted by Always On Watch at 3:35 PM