WW4 IS REALLY A RETURN TO THE REAL WW1

The current global war is very often referred to as WW4, (WW3 being the cold War).

That allowed the earlier conflicts which led to the first real global war to resurface: the war between islamism and everyone else. The Crusades were a counter-attack to islamism. The war between the West - THE FREE WORLD - was and remains WORLD WAR ONE. 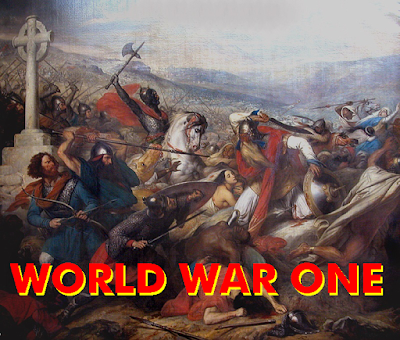 The Global War Against Islamism is WW1. YUP: Since the fall of the USSR we in the free world have had to counter-attack the islamists again.

This time I hope we finish the job. That means doing to them what FDR and Truman did to the Nazis and Japan's militarists.

CRUSHING Nazism didn't mean exterminating all Nazis or Germans; it did mean eradicating Nazism and bringing the worst perpetraors of Nazi atrocities to justice - summary or military.

Or we will lose.
Posted by Reliapundit at 8:47 AM

WE DIDN'T; EXTERMINATE ALL GERMANS OR EVEN ALL NAZIS.

OF COURSE, IF THEY STAGE AN ARMED RESISTANCE, THEN...