HEY KIDDIES, WAKE UP!: OBAMANOMICS IS DESTROYING YOUR FUTURE, AND THE FUTURE IS NOW! 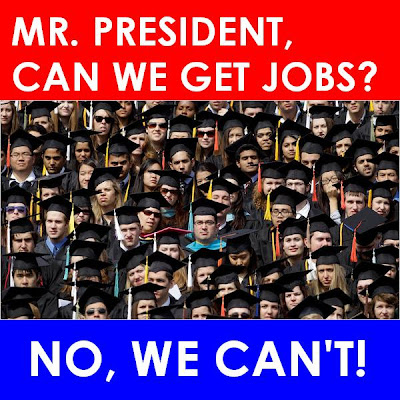 ... evidence is emerging that the damage wrought by the sour economy is more widespread than just a few careers led astray or postponed. Even for college graduates — the people who were most protected from the slings and arrows of recession — the outlook is rather bleak. Employment rates for new college graduates have fallen sharply in the last two years, as have starting salaries for those who can find work.

... The median starting salary for students graduating from four-year colleges in 2009 and 2010 was $27,000, down from $30,000 for those who entered the work force in 2006 to 2008, according to a study released on Wednesday by the John J. Heldrich Center for Workforce Development at Rutgers University. That is a decline of 10 percent, even before taking inflation into account.

... Even these figures understate the damage done to these workers’ careers. Many have taken jobs that do not make use of their skills; about only half of recent college graduates said that their first job required a college degree.

IT'S TIME THE YOUTH WOKE UP AND REALIZED THE SOCIALIST POLICIES OF OBAMA AND HIS COMRADES ON THE DEMOCRAT PARTY HAVE HURT THEM BADLY.

THE PORKULUS AND CARBON TAX SCHEMES AND OBAMACARE ARE MAKING THIS ECONOMY WORSE NOT BETTER.

IT'S TIME THE YOUTH VOTED THEIR INTERESTS AND THAT MEANS VOTE CONSERVATIVE.