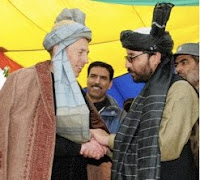 Diana West has long maintained a low opinion of Gen. David Petraeus, whom she feels is one of the architects of Arabist/Islamist policies.

With this picture worth a thousand words, what else can be said, aside from how he makes himself into a male who wears a Muslim male's type of headwear as a totally unnecessary sign of "respect", but which is more like degradation and definite appeasement, and gives a little more insight into how that degrading "option" was authorized for female soldiers to wear a burka on missions in Afghanistan?

After seeing this, I no longer have any respect for Petraeus, who shouldn't even be wearing what looks like a primitive coat.

He doesn't need to wear a military uniform; he could wear a suit and tie, but to wear what may be tribal gear is just as insulting as that headpiece.

Update: While we're on the subject, Rob Miller's discovered more about just how bad Petraeus and his aides are.

This man is not suited to lead the US army, and should resign.
Posted by Avi Green at 5:26 PM

Gen.Petraeus is a member of the CFR, he should not have been in the Pentagon. Most Generals and officers are members of the CFR, I have the list. General Petraeus has now been made head of the CIA. I'm not sure which is worse. Our whole Gov. and its branches are a joke, they are all run by the CFR, our Government is loaded with CFR members and even the Tea Parties push them, such as Newt Gingrich, and John Bolton, even Charles Krauthammer is a member. It would be a lot easier to post a list of people who are not members, there are less of them.