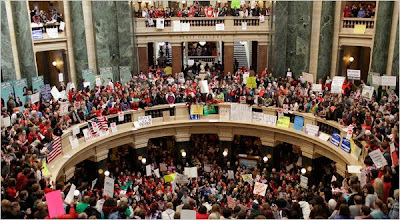 Thousands of public workers flooded the rotunda of the Capitol in Madison, Wis., protesting a proposal to cut benefits and remove most of their unions’ ability to bargain.

Scott Walker, the Republican who has been Wisconsin’s governor for about six weeks, calmly described his intent to forge ahead with plans to cut benefits to public workers and to sharply curtail collective bargaining rights in the state. Yes, some angry workers had surrounded his state car on Tuesday and started pounding on it. And yes, others had surrounded his home in Wauwatosa. But Mr. Walker said he had no other options.

“I’m trying to balance a budget,” he said.

... [TAX-TAKING GOVERNMENT UNION...] workers said they were frightened of what the cuts would mean for their family budgets, particularly for some workers who were already struggling. The changes call for them to pay 5.8 percent of their salary toward their pensions, much more than now, and at least 12.6 percent of their health care premiums, double their current contribution.[A SMALL CONTRIBUTION COMPARED TO WHAT TAX-PAYERS MUST CONTRIBUTE IN THE REAL WORLD!]

But workers also seemed worried about the broader, lasting impact of the proposed changes to the way public employee unions operate in the state.

Aside from police and firefighters, raises for workers would be limited to the consumer price index, unless the public agreed to a higher raise in a referendum. Most unions would have to hold annual elections to keep their organizations intact and would lose the ability to have union dues deducted from state paychecks — making it more difficult, some here say, for unions to survive.

THE AXIS OF TAXES IS BEING DISMANTLED:

THE GOP AND THE TEA PARTY ARE DISMANTLING THE DEMOCRAT PARTY/GOVERNMENT UNION COMBINE THAT'S BEEN RIPPING OFF US TAXPAYERS FOR DECADES.

NOT ONE MIND; NOT A VOTE; NOT A DIME.

MORE ON THE AXIS OF TAXES HERE.
Posted by Reliapundit at 6:16 PM