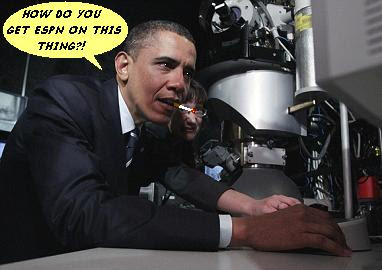 Yesterday Mr Obama flew in on Marine One, landing on the soccer pitch of Canada Community College in Redwood City, before driving to the exclusive house in a motorcade.

The White House said the trip was aimed at promoting technological innovation to help boost the struggling U.S. economy and reduce stubbornly high unemployment - considered crucial to his 2012 re- election chances.

'The president specifically discussed his proposals to invest in research and development and expand incentives for companies to grow and hire, along with his goal of doubling exports over five years to support millions of American jobs,' spokesman Jay Carney said in a statement after the meeting. 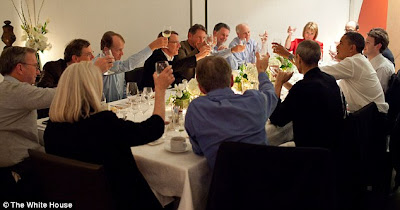 ER, UM: NOT ONE OF THESE TECH TITANS TOOK A DIME OF GOVERNMENT MONEY.

IT'S A WASTE, AND IT HURTS THE REAL ECONOMY.

OBAMA MUST BE STOPPED.
Posted by Reliapundit at 7:49 AM

In the photo, do I detect Steve Jobs leaning away from Osama??