HOW AL GORE COULD SAVE THE WORLD: ADMIT MAN-MADE CLIMATE CHANGE IS FALSE 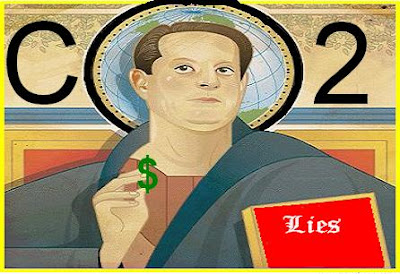 It's driving up the cost of everything including food. This is increasing global unemployment and national and international conflict.

ALL OVER A HOAX.

Oil is nearly TWICE as expensive now as in 2005, even though consumption/demand is only up 9%.

SURE: the price isn't any where near the outrageous BUBBLE PRICE of 2008 (a bubble which helped push the USA and world into a horrific recession!).

Nevertheless, the price remains TOO DAMNED HIGH BASED ON DEMAND - especially if you consider that since 2006 BILLIONS MORE barrels of proven reserves have been located. OPEC had at least a 4% increase - and natural gas is in a global glut - we know have at least a 250 year reserve!! And Canadian oil sands and Brazil's off-shore finds have all increased the supply of proven global energy reserves.

One of the MAJOR reasons THE PRICE OF OIL IS TOO DAMN HIGH is ... Al Gore.

Yup: Gore and his army of alarmists dupes and alarm-exploiters have successfully raised the cost of ALL ENERGY (and also FOOD because crops once reaped for food are now reaped for industrial energy).

Costs for all manufacturing has gone up as a result - and manufactured goods, margins have declined for many, and the cost of living has suffered a double whammy: goods are more expensive and so is food.

Al Gore can stop this INSANITY by admitting AGW was all wrong.

Carbon taxes and other subsidies for so-called "green energy and the so-called green economy would vanish - meaning governments could cut deficits and this would immediately help lower interest rates.

The use of CHEAP COAL could once again be increased, and quickly - thus lowering energy costs for everyone - including all industry.

Food costs will come down for two reasons: more supply of food, and fertilizers (which need a lot of energy to be manufactured) would become cheaper again.

This wealth effect would mean they would spend and invest more and this will make the global economy grow - leading to more prosperous and healthy lives for everyone - especially the poor.

And the Third World could abandon fear of industrialization and begin to invest in the power plants and cement factories and asphalt factories - and yes sweat shops - so they can build homes and highways and roads and electrical grid which will lead them as it led us: to better way of life for all their people.

THERE ARE ONLY TWO THINGS PREVENTING AN IMMEDIATE, ROBUST AND SUSTAINABLE GLOBAL ECONOMIC RECOVERY:

WILL AL GORE?
Posted by Reliapundit at 3:31 PM

Proving that a lie, even a lie first uttered with good intentions (though I think Gore left the realm of good intentions quite a long time ago) is the origin of all evil.

Hello, I am not a fan of the belief that man made global warming.
However, I do have a question and I would like to hear your ideas. My question is, if we do not believe that man is causing the global warming problem; do you believe that it is happening? And, follow up question, if you do or do not believe it is happening, do you think that there is anything we can or should do to help the earth either way?
I appreciate your feedback and I think you for your time