Posted by Glenn Reynolds at 6:45 pm

Forests in the Interior West could soon flip from carbon sink to carbon source, forest experts say. The region's forests once absorbed and stored more carbon from the atmosphere than they released. But ... dead trees are releasing massive amounts of carbon dioxide, turning the region into a net emitter of carbon rather than a CO2 sponge.

I POSTED ON THIS PHENOMENA 5 YEARS AGO AND IN A MUCH WIDER/LARGER CONTEXT: THE AMAZON:

Trees in the Amazon tropical forests are old. Really old, in fact, which comes as a surprise to a team of American and Brazilian researchers studying tree growth in the world’s largest tropical region.

Using radiocarbon dating methods, the team, which includes UC Irvine’s Susan Trumbore, found that up to half of all trees greater than 10 centimeters in diameter are more than 300 years old. Some of the trees, Trumbore said, are as much as 750 to 1,000 years old. Study results appear in the online early edition of the Proceedings of the National Academy of Sciences.

Because their trees are old and slow-growing, the Amazon forests, which contain about a third of all carbon found in land vegetation, have less capacity to absorb atmospheric carbon than previous studies have predicted. Although some of the largest trees also grow the fastest and can take up carbon quickly, the vast majority of the Amazon trees grow slowly.

“In the Central Amazon, where we found the slowest growing trees, the rates of carbon uptake are roughly half what is predicted by current global carbon cycle models,” Trumbore said. “As a result, those models – which are used by scientists to understand how carbon flows through the Earth system – may be overestimating the forests’ capacity to remove carbon dioxide from the atmosphere.”

If this is true, then as the Amazon forest has been allowed to AGE, it has become less efficient at absorbing atmospheric CO2 - at CO2 uptake, and this means more CO2 stays in the atmosphere every year as a result. The increase of atmosphreric CO2 over the last 100 years might be a result of this - the aging of the Amazon - and NOT INDUSTRIALIZATION OR ANYTHING "MAN-MADE."

If we CUT DOWN MORE TREES WITHIN THE AMAZON - AND REPLANTED THESE AREAS WITH YOUNG TREES - (like EVERY good forestry corporation routinely does everywhere) - then we would actually BE REDUCING GREENHOUSES GASES.


"Save the Atmosphere! Cut Down the Amazon!"
Somehow, I don't think Sting, or any other member of the chic glitterati or anyone on the Left or in the Green Movement will get behind this BRILLIANT idea.

I POSTED ON THE AMAZON'S TREES - AND HOW IT'S NEVER REALLY BEEN A PRISTINE OR UNTOUCHED FOREST - AGAIN IN 2009:

ARCHAEOLOGISTS HAVE PROOF THAT 700 YEARS AGO THE AMAZON RAINFOREST WAS CIVILIZED/POPULATED AND NOT A VAST "PRISTINE" TROPICAL JUNGLE: 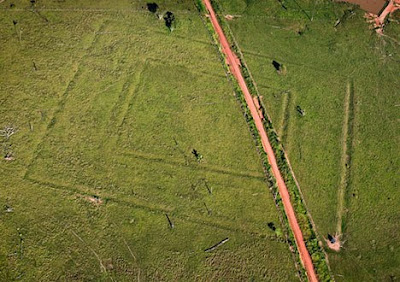 With the aid of satellite imagery from Google Earth, soon archaeologists in Brazil will be finding more and more large geometric designs carved into the ground in the Amazon rainforest.

The geoglyphs are believed to have been sculpted by ancient people from the Amazon region around 700 years ago, though their purpose is still unknown. So far, nearly 300 geoglyphs have been identified, but with advances in satellite imaging--and increased clearing of the jungle coverage--scientists are hoping to discover many more of these strange, geometric designs.

One of the factors that contributed to so many geoglyphs being undetected prior to the aid of satellites is their enormous size. According to leading geoglyph scientist Alceu Ranzi, his latest discoveries--five sets of geometric shapes, with circles, squares and lines--can measure more than a mile from one extreme to another.

You do not see them in field. There is a difference in the color of grass but is very thin. If there were no satellite images, there would be no possibility [of making these new discoveries].

Because they've been so hard to find, the first geoglyphs weren't discovered until the 1970s. Since then, scientists have been trying to piece together what significance they may have had to ancient Amazonians.

ANOTHER ECO-NUTSIE MYTH BITES THE DUST.

THE IDEA THAT ANCIENT INDIGENOUS PEOPLE WERE GOOD STEWARDS OF THE EARTH, AND THE EVIL WHITE MAN COLONIZER/IMPERIALIST WAS BAD IS BS.

THE IDEA THAT THE RAINFOREST IS PRISTINE AND WAS ALWAYS UNTOUCHED IS BS, TOO.

IF THE ECO-NUTSIES REALLY BELIEVED THAT ATMOSPHERIC CO2 IS GOING UP AND THAT THIS WILL CAUSE A GLOBAL CLIMATE CATASTROPHE, THEN THEY WOULD SUPPORT THE MASSIVE HARVESTING OF THE OLD TREES IN THE AMAZON - AND REPLANTING IT WITH YOUNG TREES.

IF OLD TREES IN FORESTS WORLDWIDE ARE A LEADING CONTRIBUTOR TO ATMOSPHERIC CO2, THEN THE AGW ALARMISTS SHOULD DEMAND WE ALLOW OLD TREES ALL OVER THE WORLD BE HARVESTED.

Posted by Reliapundit at 9:24 PM