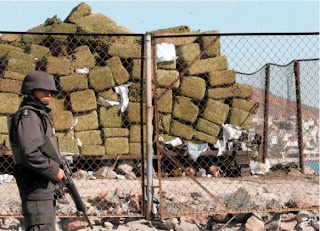 President Obama has denied that rising violence is making Mexico more and more like Colombia at the height of its drugs war.

The remark is an apparent contradiction to comments made by his Secretary of State, Hillary Clinton.

She said on Wednesday that the drug war in Mexico had begun to resemble the violence in Colombia 20 years ago.

But Mr Obama told a US Spanish-languange newspaper that there was no comparison between the two.

"Mexico is vast and progressive democracy, with a growing economy, and as a result you cannot compare what is happening in Mexico with what happened in Colombia 20 years ago," he told the Los Angeles-based daily La Opinion.

FROM THE ABOVE LINK:

More than 28,000 people have died in drug-related violence in Mexico since President Felipe Calderon deployed the army to fight the cartels in 2006 and violence has spilled over into Central America.

Gunmen killed the mayor of a town in northern Mexico as he sat at his desk, the third politician slain in the past month as drug-related violence escalates.

... Violence is the biggest threat to the Mexican economy, according to 57 percent of business executives, up from 49 percent in March and 22 percent in December 2009, a July survey published by Deloitte Touche Tohmatsu showed. Its impact is shaving 1.2 percentage points off economic output a year, Finance Minister Ernesto Cordero said Sept. 1.

THE MEXICANS GOT A LITTLE PISSED OF AT HILLARY FOR HER COMMENTS.

AND OBAMA IS PANDERING. IT'S DISGUSTING.

WHAT MAKES IT WORSE?

HE HAS NEVER AS VOCIFEROUSLY DEFENDED THE USA; INSTEAD, OBAMA USUALLY APOLOGIZES FOR THE USA.

OBAMA IS NOTHING MORE THAN A LEFT-WING ANTI-AMERICAN SC*MB*G WITH A MELLIFLUOUS BARITONE, A WARM SMILE AND A WANING ABILITY TO GET PEOPLE TO BELIEVE HIS LIES.

Posted by Reliapundit at 6:23 PM