IS A MEGA-TERROR ATTACK IMMINENT? IT WOULD SEEM SO... IF WE CONNECT THE DOTS 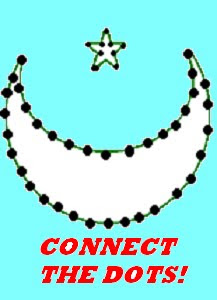 WHAT DOES ALL THIS ADD UP TO?

WELL, I POSTED THIS YESTERDAY:

MORE AND MORE BY THEIR TACTICS, THESE MEXICAN THUGS RESEMBLE JIHADISTS IN AFGHANISTAN (AND ELSEWHERE).

I THINK THIS IS MORE THAN A COINCIDENCE - AND NOT JUST IMITATION,

I THINK THAT JIHADISTS ARE ACTIVELY HELPING THE NARCO-TERRORISTS INSIDE MEXICO.

CHAVEZ AND MORALES HAVE OPENLY EXPRESSED ADMIRATION FOR COCA GROWERS AND THE DRUG TRADE AND FOR JIHADISTS.

CHAVEZ HAS AIDED THE NARCO-TERRORISTS IN COLOMBIA FOR YEARS.

I THINK WE'RE SEEING THE SAME AXIS OF EVIL WITHIN MEXICO.

AND THEIR ALLIANCE PROBABLY GOES DEEPER THAN DRUGS: THE MEXICAN GANGS HAVE PROBABLY HAVE BEEN SMUGGLING JIHADISTS INTO THE USA.

HENCE THIS PREDICTION: THE NEXT BIG JIHADO-TERROR ATTACK WILL BE IN THE SOUTHWESTERN USA.

AND SOONER THAN ANYONE THINKS.

NOW COMES THIS NEWS - VIA DRUDGE:

A team of federal agents has been stopping tractor-trailers on Interstate 20 just west of Atlanta, inspecting each truck as it passed through a weigh station ... its part of a counter-terrorism operation.

... a flashing sign on the interstate directed the trucks to pull into a state-owned inspection station near Lee Road in Douglas County at the height of the evening commute.

... agents from several federal agencies, including Homeland Security, the Department of Transportation, and the Transportation Security Administration were involved. The Douglas County Sheriff’s Office was assisting in the exercise.

... the event is known as Visible Inter-mobile Prevention and Response, or VIPER, an operation that is conducted with local authorities as a training exercise. The TSA spokesman said the operation is not in response to a specific threat.

News Chopper 2 showed screening devices, dogs and a large drive-through bomb detection machine in use along the eastbound interstate near Lee Road.Trucks were being sorted into two lines, one with more rigorous screening. Agents used a variety of devices to check the exteriors of the trailers, including a large drive-through machine similar to a security tool used at the Super Bowl, and a tool that measures radiation.

I SUSPECT THAT THEY'RE LOOKING FOR WMD THAT CAME IN THROUGH MEXICO.

IF THEY'RE SEARCHING THIS GEORGIA CORRIDOR THEY PROBABLY SUSPECT THE TARGET IS WASHINGTON OR NY.

OR PERHAPS JUST SAN DIEGO AND NORFOLK - IMPORTANT NAVAL BASES FOR THE USA. OR PERHAPS ANY BIG MILITARY BASE.

WE'VE ALREADY HAD MORE ATTACKS HERE IN THE HOMELAND UNDER OBAMA THAN DURING BUSH'S 8 YEARS.

WE ARE NOT AS SAFE AS WE WERE - THANKS TO OBAMA AND HOLDER AND NAPOLITANO.

IF YOU SEE SOMETHING SAY SOMETHING - AND SAY IT LOUD AND CLEAR!

NOTE:
THIS THURSDAY, INDIA'S SUPREME COURT WILL ANNOUNCE IT'S AYODHYA DECISION. IF IT GOES AGAINST THE MUSLIMS, THEN I EXPECT MASSIVE RIOTS IN INDIA AND A RASH OF GLOBAL ATTACKS.

THAT'S RIGHT: TO JIHADISTS, THIS IS BIGGER THAN MOHAMED CARTOONS OR WACKY PREACHERS THREATENING TO BURN KORANS.

IT MAYBE THE TRIGGERING EVENT THAT THE ENEMY WAS PREPPING FOR.

Posted by Reliapundit at 8:29 PM

Chaos can assist operations both ways...