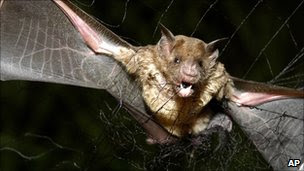 Vampire bats feed on the blood of mammals while they sleep

Peru's health ministry has sent emergency teams to a remote Amazon region to battle an outbreak of rabies spread by vampire bats.

Four children in the Awajun indigenous tribe died after being bitten by the bloodsucking mammals.

Health workers have given rabies vaccine to more than 500 people who have also been attacked.

... Some local people have suggested this latest outbreak of attacks may be linked to the unusually low temperatures the Peruvian Amazon in recent years.

IF WE WANT TO STOP THIS THEN WE OUGHT TO BURN MORE CO2 TO HEAT THINGS UP!