A CORRUPTOCRATIC TWOFER: MAXINE WATERS TO GET CONGRESSIONAL ETHICS TRIAL, TOO - (ALONG WITH RANGEL)

POLITICO first reported earlier this week that the committee was expected to unveil its charges against Waters before leaving town for the recess.

Her decision to go to trial appears to have postponed the release of the committee’s formal charging document, called a “Statement of Alleged Violation.”…

Members of the Congressional Black Caucus have complained that the OCE has unfairly and disproportionately targeted them, and many have signed onto a legislative effort to de-fang the office.

Smart play by Waters to force a trial. With the Rangel case already on the national radar and the CBC unhappy that its members are in the crosshairs, she probably figures, with good reason, that it’s unlikely the ethics committee will come down hard on her. Which raises the question: Can this clusterfark get any worse for Democrats? My friends, it can.

WE POSTED ON MAXINE'S CORRUPT WAYS WAY BACK OVER A YEAR AGO: 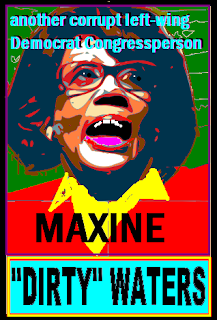 Top federal regulators say they were taken aback when they learned that a California congresswoman who helped set up a meeting with bankers last year had family financial ties to a bank whose chief executive asked them for up to $50 million in special bailout funds.

Representative Maxine Waters, Democrat of California, requested the September meeting on behalf of executives at One- United, one of the nation’s largest black-owned banks.

Ms. Waters’s husband, Sidney Williams, had served on the bank’s board until early last year and has owned at least $250,000 of its stock.

Treasury officials said the session with nearly a dozen senior banking regulators was intended to allow minority-owned banks and their trade association to discuss the losses they had incurred from the federal takeover of Fannie Mae and Freddie Mac.

But Kevin Cohee, OneUnited’s chief executive, instead seized the opportunity to plead for special assistance for his bank, federal officials said.

“Here you had a tiny community bank that comes in and they are not proposing a broader policy — they were asking for help for themselves,” said Stephen Lineberry, a former Treasury aide who attended the meeting. “I don’t remember that ever happening before.”

Ms. Waters declined on Tuesday to comment on the meeting, or to say whether her husband still owned shares of OneUnited.

THIS ISN'T THE FIRST TIME SHE'S BEEN IMPLICATED IN A SCANDAL:

LOS ANGELES - Rep. Maxine Waters family members earned more than $1 million in the last eight years doing business with candidates, companies and causes she helped, a newspaper reported Sunday. Waters' daughter and son pocketed fees from campaigns endorsed by the congresswoman while her husband worked for a bond underwriting firm that received government business from her political allies, the Los Angeles Times reported. Waters, an influential Democratic lawmaker since 1990, whose district includes parts of Los Angeles, would not answer detailed questions on the business dealings, insisting her family's fortunes were kept apart from her political activities.

. . . The Waters' close financial ties are not expressly prohibited by state laws or congressional ethics rules. The Times reported that Waters and her children are linked through a political organization called L.A. Vote that publishes an election mailer listing campaigns she endorsed. Some candidates are included free of charge, while others pay tens of thousands of dollars, it said.

. . . Of the $1.7 million that L.A. Vote collected in the last eight years, nearly $450,000 went to Waters' daughter, Karen Waters, and her consulting firm, public disclosure reports show. About $115,000 was paid to the congresswoman's son. Waters' husband, Sidney Williams, was paid nearly $500,000 for consulting work with Siebert, Brandford & Shank, a municipal bond company, and with politicians his wife supports, public records show. The Times reported that Williams helped the company win a $40 million school bond sale approved by school board members that paid Waters' mailer operation to advertise her endorsement.

AT THE VERY LEAST, SHE AND RANGEL AND MURTHA AND DODD AND REID AND PELOSI AND EMANUEL SHOULD BE CENSURED FOR THEIR CORRUPTION.

THE DEMOCRAT PARTY HAS BECOME NOTHING MORE THAN A COALITION OF THE CORRUPT AND THE GULLIBLE.
Posted by Reliapundit at 10:27 PM

In another day they would have been tarred and feathered.