The median duration of unemployment is higher today than any time in the last 50 years.

It is more than twice as high today than any time in the last 50 years. — OK, you're saying, but what does this mean?

This is a by-product of a few things:
WE CAN CHANGE THE FIRST TWO THIS NOVEMBER: VOTE GOP!

BECAUSE UNEMPLOYMENT IS LASTING SO LONG, CONGRESS HAS EXTENDED BENEFITS - BUT NOT WITHOUT A FIGHT.

THE LEFT AND THE MFM HAVE TRIED TO PAINT THE GOP AS BEING AGAINST THE EXTENSION.

BUT THAT WASN'T THE CASE.
THIS EXPLAINS IT PERFECTLY: 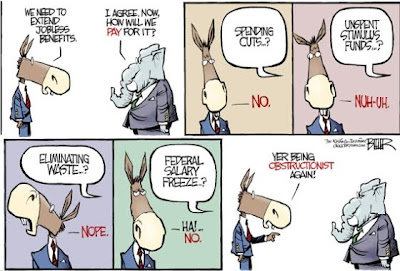 Posted by Reliapundit at 7:37 PM