Former President Bill Clinton liked what he saw from the U.S. World Cup team so much, he’s staying for the next game.

Clinton said yesterday that he changed his schedule so he can attend the Americans’ game against Ghana tomorrow in Rustenburg, South Africa. The honorary chairman of the U.S. bid to host the World Cup in either 2018 or 2022, Clinton was in the stands for Wednesday’s thrilling 1-0 victory against Algeria that sent the United States on to the round of 16. He then spent more than an hour in the locker room celebrating with the team.

“I lost my voice yesterday. I had to come home and drink hot tea with honey for an hour,” Clinton said. “I was very diplomatic until we scored, and then I was up there screaming and yelling with everybody.”

Clinton was meeting with former South African President Nelson Mandela later yesterday and traveling to Malawi today to visit health initiatives and economic development projects sponsored by his Clinton Foundation. He also made a trip to Tanzania to check on foundation projects there.

But his primary purpose in Africa is to promote the U.S. World Cup bid to FIFA’s executive committee, which will select the 2018 and 2022 hosts in December. Clinton sat with FIFA President Sepp Blatter during Wednesday’s game, met with seven members of the executive committee yesterday and will meet with others at a reception Sunday in Cape Town. 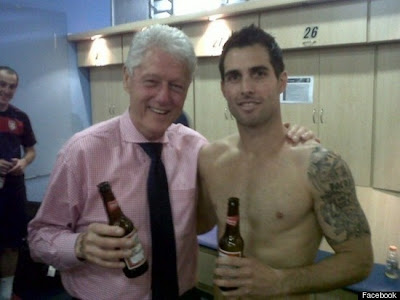 BJ LOOKS LIKE HE STILL KNOWS HOW TO HAVE A GOOD TIME...

GEE: I HOPE BJ DOESN'T GET BIT BY ONE OF THEM NEW CONDOMS.
Posted by Reliapundit at 4:07 PM