Who Burned the Second Temple? 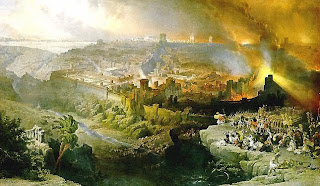 Not really a mystery.

But who commanded them? Their direct commander was not Vespasian, who left Judea to become Emperor shortly before the siege of Jerusalem was concluded.

Nor was their commander Vespasian's son Titus, although as the overall commander of the war against the Jews, he is usually accorded most of the blame.

The actual commander of the troops who burned and sacked the Holy Temple was the former Prefect of Egypt, Tiberius Julius Alexander -- later Prefect of the Praetorian Guard.

Tiberius Julius Alexander was a Greek-speaking Alexandrian Jew -- and the nephew of the Jewish philosopher, Philo.

Based on the way he is described by the historian Josephus, many believe that Tiberius Julius Alexander was an apostate -- a secular, unbelieving, assimilated Jew.

There are many of his type abroad in the land today. To ingratiate themselves with the current overlords of the world, they are quick to deploy all of their skills, energies, and talents against the people from which they come.

The Tony Judts, Peter Beinarts, Rahm Emanuels, Noam Chomskys are the inheritors of a sadly long and ignoble tradition.

The Roman Empire is no more. The glorious power to which Tiberius Julius Alexander devoted his energy and his life has become dust. No vestal virgin tends the Roman hearth fire. No sacrifices are offered to the Roman gods.

But the Priestly Blessing is still chanted before the site of the Holy Temple in Jerusalem.
Posted by Punditarian at 8:59 PM

Excellent! How interesting! And beautiful! Thanks for the info.

Don't forget the organization "J-Street." The whole lot of them are simply a cover for Obama to do as he pleases against the Jewish people (and Israel).

Most interesting. Excellent. We who are about to blog, salute you.

Ayn Rand was an Atheist. This is not a religious issue, but rather rational v. irrational thinking. Liberalism is devoid of rational thought. JINOs just emote. To have an objective conversation with them is rather difficult

ggg: the point is that beinart claims to be a good jew - and isn't any more than the judenrate or TJA.

jino's worship the nytime editorials not the Torah but then claim to be good jews.

atheists are non-jews. they are not germane to this post.