A MESSAGE TO MY FELLOW JEWS: IT'S TIME TO CHOOSE

After more than a month of agonizing diplomatic tension, President Obama seems determined to damage the U.S.-Israel relationship by pursuing a poorly thought-through policy shift at our ally's expense.

What became of the candidate who promised pro-Israel voters that "When I am President, the United States will stand shoulder to shoulder with Israel"? Today, we hear directly from the administration that the President has decided to "balance support for Israel against other American interests." The result of this flip-flop is, as the Timesnotes, "a chilly standoff" between our nations - but no progress whatsoever toward peace.

After more than a month of unprecedented snubs and diplomatic pressure, the Times'report provides yet another wake-up call to the deeply pro-Israel majorities in Congress and across our nation.

ANY OF YOU WHO SUPPORTED OBAMA AND THE DEMOCRATS MUST NOW CHOOSE BETWEEN YOUR PARTISAN ALLEGIANCE AND YOUR IDENTITY AS JEWS.

NONE OF YOU WOULD HAVE SUPPORTED OR VOTED FOR FORMER SECRETARY OF STATE JAMES BAKER FOR PRESIDENT OF THE UNITED STATES OF AMERICA. 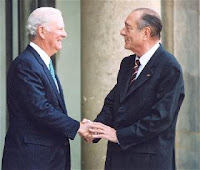 BAKER FAMOUSLY SAID, "FUCK THE JEWS." (YES: HE SAID IT, BUT OBAMA IS DOING IT!)

YET NOW, OBAMA HAS CLEARLY A EXPLICITLY CHARTED A COURSE FOR US FOREIGN POLICY WHICH IS MORE HOSTILE TO ISRAEL THAN ANY DEVISED BY BAKER.

IF YOU WOULDN'T SUPPORT BAKER, THEN WHY DO YOU SUPPORT OBAMA?

IT'S TIME FOR YOU TO CHOOSE:
I PRAY YOU CHOOSE WISELY AND WELL.

UPDATE: MANY JEWS ARE CHOOSING WELL:

Not all of that is attributable to the falling out with Israel, of course — in fact, a bare majority approve of how he’s handling relations with them(!) — but, by comparison, his approval rating among Jews in the previous poll was 57 percent.

To be momentarily underwater on a question about reelection within a demographic that broke for him in 2008 by an almost 60-percent margin seems … astonishing.

The poll also finds that Jews oppose any attempt by the White House to recognize a Palestinian state within the next two years, 28/52,

AWESOME!
Posted by Reliapundit at 5:42 PM

Dear Astute: I totally support what you say.

What part don't they understand about NOW???

Israel must say to the rest of the dhimmi world: get lost! and use its nukes! L'chaim!