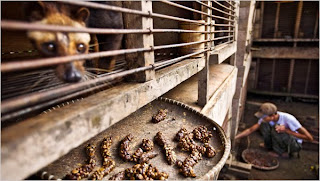 NYTIMES: From Dung to Coffee Brew With No Aftertaste

Reaching a valley where coffee trees were growing abundantly, he scanned the undergrowth where he knew the animals would relax after picking the most delicious coffee cherries with their claws and feasting on them with their fangs.

His eyes settled on a light, brownish clump atop a rock. He held it in his right palm and, gently slipping it into a little black pouch, whispered:

Not quite. But Mr. Sibayan’s prize was the equivalent in the world of rarefied coffees: dung containing the world’s most expensive coffee beans.

Costing hundreds of dollars a pound, these beans are found in the droppings of the civet, a nocturnal, furry, long-tailed catlike animal that prowls Southeast Asia’s coffee-growing lands for the tastiest, ripest coffee cherries.

The civet eventually excretes the hard, indigestible innards of the fruit — essentially, incipient coffee beans — though only after they have been fermented in the animal’s stomach acids and enzymes to produce a brew described as smooth, chocolaty and devoid of any bitter aftertaste.

As connoisseurs in the United States, Europe and East Asia have discovered civet coffee in recent years, growing demand is fueling a gold rush in the Philippines and Indonesia, the countries with the largest civet populations.

Harvesters are scouring forest floors in the Philippines, where civet coffee has emerged as a new business.

In Indonesia, where the coffee has a long history, enterprising individuals are capturing civets and setting up minifarms, often in their backyards.

LIBERALS DRANK OBAMA'S KOOL-AID SO I GUESS THEY WILL DRINK ANYTHING.

ESPECIALLY IF IT'S EXPENSIVE AND HAS THE NYTIMES STAMP OF APPROVAL.

IOW: IT'S A SHORT HOP SKIP AND A JUMP FROM LEFT-WING SHIT TO CIVET SHIT.

THEY DRINK IT WHILE READING THE NYTIMES AND LISTENING TO NPR'S MORNING EDITION: MMMMMMMMMMMMMMMMM!

(YES YES: I KNOW: IT AIN'T JUST NYTIMES LIBS WHO DRINK THIS SHIT: INDONESIANS DRINK IT, TOO. WELL ER UM: THEY'RE MUSLIMS. FIGGERS: IF THEY DRINK UP THE CRAP IN THE KORAN THEN THEY WILL DRINK ANYTHING!)

EXIT QUESTION: HOW LONG BEFORE HOT AIR AND INSTAPUNDIT LINK TO THE NYTIMES ARTICLE?
Posted by Reliapundit at 8:52 PM