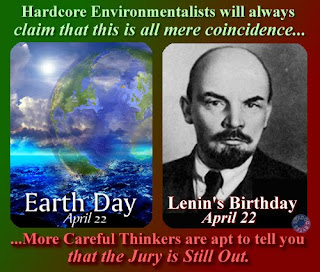 It doesn’t require a conspiratorial inclination to wonder if it was a coincidence that so-called “earth day” shared the date with Vladimir Lenin’s day of birth. But here we are, despite the dire predictions of doom, having fared better than Lenin.

Our gift to you on this the 40th anniversary of the movement devoted to completely distorting environmental and ecological reality are these books, one of which (the first) is officially released today.

... a call to action, warning Americans that their future is being undermined by a phony pseudo-science aimed at altering and dominating every aspect of life in the United States and the world.

... It’s as seamy as what happened on Wall Street.

The Hockey Stick Illusion: Climategate and the Corruption of Science (Independent Minds)

THE BIGGEST LIE OF THE 20TH CENTURY WAS MARXIST-LENINISM. 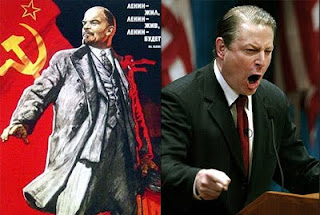 THE BIGGEST LIE OF THE 21ST IS ANTHROPOGENIC CLIMATE CHANGE.

BOTH LEFTIST/SOCIALIST LIES ARE HARMFUL TO PROSPERITY.

AS WE HAVE LONG SAID:

IF YOU WANT TO MAKE POVERTY HISTORY, THEN YOU HAVE TO MAKE LEFTISM HISTORY.
Posted by Reliapundit at 10:44 AM