Mr. Obama, speaking at a health care rally in northern Virginia on March 19, said, “Starting this year, insurance companies will be banned forever from denying coverage to children with pre-existing conditions.”

The authors of the law say they meant to ban all forms of discrimination against children with pre-existing conditions like asthma, diabetes, birth defects, orthopedic problems, leukemia, cystic fibrosis and sickle cell disease. The goal, they say, was to provide those youngsters with access to insurance and to a full range of benefits once they are in a health plan.

To insurance companies, the language of the law is not so clear.

Insurers agree that if they provide insurance for a child, they must cover pre-existing conditions. But, they say, the law does not require them to write insurance for the child and it does not guarantee the “availability of coverage” for all until 2014.

William G. Schiffbauer, a lawyer whose clients include employers and insurance companies, said: “The fine print differs from the larger political message. If a company sells insurance, it will have to cover pre-existing conditions for children covered by the policy. But it does not have to sell to somebody with a pre-existing condition. And the insurer could increase premiums to cover the additional cost.”

Congressional Democrats were furious when they learned that some insurers disagreed with their interpretation of the law.

“The concept that insurance companies would even seek to deny children coverage exemplifies why we fought for this reform,” said Representative Henry A. Waxman, Democrat of California and chairman of the Energy and Commerce Committee. 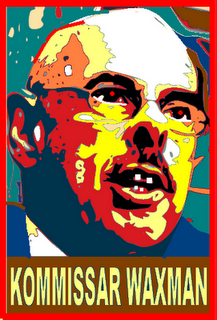 THIS IS WHAT HAPPENS WHEN LEFTIST THUGS WRITE LAWS BEHIND CLOSED DOORS AND PASS THEM WITHOUT READING THEM!

Perhaps Commissar Waxman can drag all the health insurers in front of his committee and threaten them the way he plans to threaten all the corporations who - following the letter of the Obamacare legislation and the letter of SEC laws - have announced benefit billions in cuts and write offs.
Posted by Reliapundit at 11:14 AM