THE SESTAK BRIBE: OBAMA HAS COMMITTED AN IMPEACHABLE OFFENSE 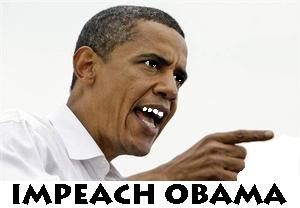 Three weeks ago, Representative Joe Sestak said that the President had offered him a political appointment if he wouldn't run against Senator Arlen Specter. This should have been a bombshell, but it has gone largely unremarked because the White House is successfully avoiding the issue.

Sestak is sticking by his earlier statement, though he's chosen not to expand on it. The White House's silence on the issue—the Administration is not even denying the charge—is beginning to look like guilt. So what could the President be guilty of?

18 U.S.C. § 600. Promise of employment or other benefit for political activity

Whoever, directly or indirectly, promises any employment, position, compensation, contract, appointment, or other benefit, provided for or made possible in whole or in part by any Act of Congress, or any special consideration in obtaining any such benefit, to any person as consideration, favor, or reward for any political activity or for the support of or opposition to any candidate or any political party in connection with any general or special election to any political office, or in connection with any primary election or political convention or caucus held to select candidates for any political office, shall be fined under this title or imprisoned not more than one year, or both.

That sounds just like what happened here, if Sestak's claim is true. Obama promised an appointment as a consideration for political activity, including support for Arlen Specter, in a primary election.

WHEN THE GOP RETAKES THE HOUSE, IMPEACHING OBAMA SHOULD BE THEIR FIRST ORDER OF BUSINESS.

Posted by Reliapundit at 4:49 PM

yA KNOW, THESE comments HOOPS suck donkey obaMAOS!!!!!!!!
You're probably losing readers, and for sure any COMMENTS!!!