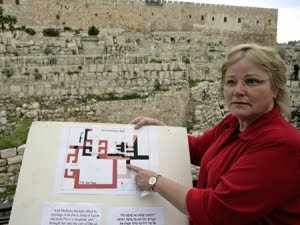 A section of city wall that enclosed ancient Jerusalem and was probably built by King Solomon in the 10th century BC was found during recent digs, the Hebrew University of Jerusalem said yesterday.

The unearthed wall is 6m high and 70m long, a statement said.

“We can estimate, with a high degree of certainty, that this was built by King Solomon toward the end of the 10th century BC,” archaeologist Eilat Mazar, who excavated for three months, said in the statement.
According to the Bible, Solomon built the first Jewish temple of Jerusalem, which was destroyed by the Babylonian King Nebuchadnezzar in 586 BC.

The latest discovery “could corroborate written descriptions which recount construction projects carried out by King Solomon in Jerusalem,” the statement said.

The section of wall was discovered in the Ophel area, between the City of David and the southern part of another wall that surrounds the Temple Mount.

Also found were structures built at the same time as the section of wall, including a gatehouse accessing the royal district and a tower overlooking the Kidron Valley at the foot of the Mount of Olives, the statement said.

Pottery shards and the remains of two earthenware jars measuring 1.15m tall were also found, the statement said. One jar handle bore the inscription “For the King.”

EVERY TIME THEY STICK A SHOVEL IN THE GROUND IN THE HOLY LAND THEY DISCOVER MORE PROOF THE BIBLE IS TRUE.

The fortifications, including a monumental gatehouse and a 77-yard (70-meter) long section of an ancient wall, are located just outside the present-day walls of Jerusalem's Old City, next to the holy compound known to Jews as the Temple Mount and to Muslims as the Noble Sanctuary. According to the Old Testament, it was Solomon who built the first Jewish Temple on the site.

That temple was destroyed by Babylonians, rebuilt, renovated by King Herod 2,000 years ago and then destroyed again by Roman legions in 70 A.D. The compound now houses two important Islamic buildings, the golden-capped Dome of the Rock and the Al-Aqsa mosque.

Archaeologists have excavated the fortifications in the past, first in the 1860s and most recently in the 1980s. But Mazar claimed her dig was the first complete excavation and the first to turn up strong evidence for the wall's age: a large number of pottery shards, which archaeologists often use to figure out the age of findings.

UPDATE: MORE HERE AND ROUND UP HERE. FROM COMMENTARY:

These new discoveries, along with those of a previous dig in a different area of the city of David, contradict contrary Palestinian claims that the Jews have no claim to the area. They also debunk the assertions of some Israeli archeologists who have sought to portray the kingdom of David and Solomon as an insignificant tribal group and not the regional empire that the Bible speaks about. Indeed, Mazar believes that the strength and the form of construction required to build these structures correlates with biblical passages that speak of Solomon’s building of a royal palace and of the Temple with the assistance of master builders from Phoenicia (modern-day Lebanon). Moreover, contrary to those who speak of the Jewish presence in the city as a passing phase in ancient times, the discovery of Jewish seals, which speak directly of an Israelite state, proves that what Mazar has found are not the remains of a Jebusite fort conquered by the Jews but rather of a great city built by David and his son Solomon.

for the last century and a half, a great many academics and intellectuals have attempted to put down the existence of the ancient Jewish kingdom — which has always served as a symbol of Jewish nationhood — as a religiously inspired fiction. This deconstruction of both biblical literature and history has sought to undermine the very idea of the historical truth about ancient Israel, as well as the notion that Jewish nationhood had its roots in the past. This has been put to use by anti-Zionists and Arabs who have thought that if they could destroy the idea of King David’s existence as a historic figure, they could delegitimize modern Israel. Thus, Palestinian propagandists and the Palestinian Authority itself, which has steadfastly denied any Jewish connection to the Old City, the Temple Mount, or even the Western Wall, have copied revisionist scholarly work doubting Jewish history and incorporated that work into their negotiating position about the city’s future. The Muslim religious authority that controls the site of the Temple Mount has vandalized the area, destroying a treasure trove of antiquities in the ancient place because its officials fear that any find revealing the Jewish origins of the place will undermine their fallacious claims that seek to portray Jews as foreign occupiers in their own ancient capital.

It serves the purposes of the enemies of modern Israel to pretend that there is no such thing as biblical history or an ancient kingdom of Israel. But what Eilat Mazar and her colleagues have done is to illustrate once again just how deep the roots of Jewish Jerusalem run. Three thousand years.

LIKEWISE, THE KORAN HAS MUCH TRUTH IN IT:

THE MOST COMMON SAYING IN THE BIBLE: "AND G-D SAID TO MOSES."

ONE WRITTEN FOR A PRINCELY MAN WHO LIBERATED MILLIONS AND SPOKE WITH GOD, OR ONE WRITTEN BY A THIEVING PEDOPHILE WHO MISTOOK SATAN FOR AN ANGEL?

Posted by Reliapundit at 5:46 PM

Unlike Glenn, I actually like you more when you're off your meds.