WHAT TO DO ABOUT WOOTON BASSETT?

A radical Islamic group planning a protest march through the streets of a town that has achieved iconic status in Britain for honoring the passing hearses of British soldiers killed in Afghanistan ran into a stiff rebuff from the British government on Monday. 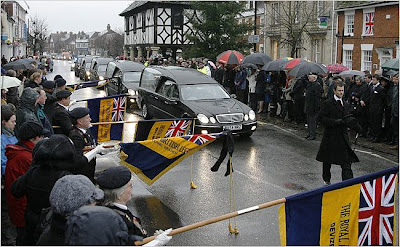 Prime Minister Gordon Brown issued a statement saying he was “personally appalled” by the group’s plan to march through the streets of Wootton Bassett, a town 50 miles west of London where townspeople have lined the sidewalks since April 2007 to mourn the passing corteges of British military casualties flown home to the nearby military airbase at Brize Norton.

“Wootton Bassett has a special significance for us all at this time, as it has been the scene of the repatriation of many members of our armed forces who have tragically fallen,” Mr. Brown said. “Any attempt to use this location to cause further distress and suffering to those who have lost loved ones would be abhorrent and offensive.”

Home Secretary Alan Johnson, who is responsible for the police, said in a separate statement that he would support any request from the police or local government officials to ban the march. “I find it particularly offensive that the town, which has acted in such a moving and dignified way in paying tribute to our troops who have made the ultimate sacrifice for their country should be targeted in this manner,” he said.

Plans for staging the march were laid out in a letter sent by Anjem Choudary, the leader of a group called Islam4UK, to the families of the 246 British soldiers killed in Afghanistan since the toppling of the Taliban in 2001.

The organization describes itself as a “platform” for promoting the views of an extremist Islamic group, Al Muhajiroun, which praised the perpetrators of the Sept. 11 attacks in the United States as heroes, but disbanded in 2005 in response to a British government order banning it.

Mr. Choudary, a 42-year-old lawyer, told the BBC his group planned to carry “symbolic empty coffins” through Wootton Bassett to honor “Muslim victims” of the conflict in Afghanistan, primarily Afghan civilians. “It’s to highlight the real cost of the war in Afghanistan,” he said. “The sad reality of the situation is that if I were to hold it somewhere else, it would not have the media attention that it has now.”

I'D LIKE TO SEE A COUNTER-DEMONSTRATION BY THE EDL. NO HOLDS BARRED.

WHAT DO YOU THINK THE BRITS SHOULD DO?

Posted by Reliapundit at 9:41 PM