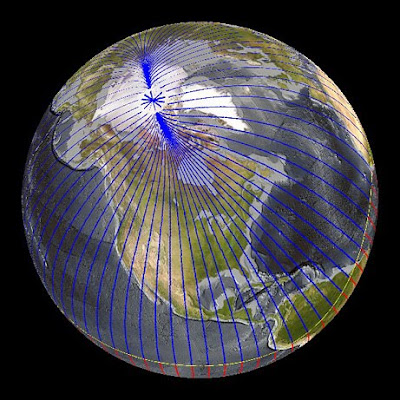 Earth's north magnetic pole is racing toward Russia at almost 40 miles (64 kilometers) a year due to magnetic changes in the planet's core, new research says.

The core is too deep for scientists to directly detect its magnetic field. But researchers can infer the field's movements by tracking how Earth's magnetic field has been changing at the surface and in space.

Now, newly analyzed data suggest that there's a region of rapidly changing magnetism on the core's surface, possibly being created by a mysterious "plume" of magnetism arising from deeper in the core.

And it's this region that could be pulling the magnetic pole away from its long-time location in northern Canada, said Arnaud Chulliat, a geophysicist at the Institut de Physique du Globe de Paris in France.

The magnetic north pole had moved little from the time scientists first located it in 1831. Then in 1904, the pole began shifting northeastward at a steady pace of about 9 miles (15 kilometers) a year.

... Scientists had long suspected that, since the molten core is constantly moving, changes in its magnetism might be affecting the surface location of magnetic north.

Although the new research seems to back up this idea, Chulliat is not ready to say whether magnetic north will eventually cross into Russia.

"It's too difficult to forecast," Chulliat said.

Also, nobody knows when another change in the core might pop up elsewhere, sending magnetic north wandering in a new direction.

NO WONDER OUR PRESIDENT HAS HIS HEAD UP HIS ASS!

Posted by Reliapundit at 9:12 PM