MAX TRIED TO HELP HIS GALPAL, MELODEE HANES, GET A BIG FEDERAL JOB: 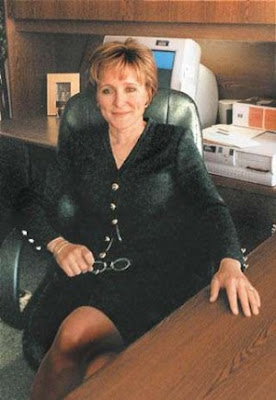 ... despite Baucus’ office contention that nothing was improper about his recommendation, it will almost certainly spark calls for Ethics Committee inquiries given the appearance that Baucus was assisting his girlfriend secure a top spot as a prosecutor in the Obama administration.

Fortunately he's [SOON TO BE FORMER SENATOR MAX BAUCUS] not a "right wing pro-marriage type guy against gay marriage" or else there might be some rule about nominating the bit of crumpet you're schtupping this week to a top federal prosecutor slot.

So long as you're not right wing and pro-marriage, this stuff is easy-breezey-lemon-squeezey.

Man, gotta be great to be a Democrat. It's like 1977 at Hef's pad over there. Nothin' but fondue and sodomy over on that side of the aisle. THE EX MRS BAUCUS - WANDA
AND THE SOON TO BE EX-SENATOR MAX
THE LEFT TRULT DOESN'T MIND THIS CRAP FROM THEIR COMRADES:
AND SO ON.

IT'S GOTTEN SO PERVERSE THAT THE OLD GOVERNOR EDWIN EDWARDS (D - LOUSIANA) QUOTE IS NO LONGER OPERATIVE:

"THE ONLY WAY I CAN LOSE IS IF I'M CAUGHT
IN BED WITH EITHER
A DEAD GIRL OR A LIVE BOY!"

THE LEFTIST DOMINATED DEMOCRAT PARTY HAS NO MORALS - UNLESS YOU COUNT BAD MORALS AS MORALS.

NOTE: WHEN REPUBLICANS GET CAUGHT DOING THIS KIND OF THING, THEY LOSE SUPPORT OF THE BASE; I.E. GUV SANFORD.