The data from the Climatic Research Unit at East Anglia University — headquarters for Climategate — is now discredited.

This discredits any findings by other research bodies that relied on the Climategate data.

How much falls from Climategate, whose participants read like a Who’s Who at the UN’s Intergovernmental Panel on Climate Change?

Not much, says CRU’s disgraced director, Phil Jones, pointing out that CRU’s data for global temperatures is but one of several datasets, all in general agreement. Besides, many argue, CRU was no linchpin to the science. The IPCC relied on numerous other sources. Throw CRU out, they say, and the IPCC’s conclusions remain unshakable.

In truth, if you throw CRU out, you’ve eviscerated the findings of the IPCC’s Fourth Assessment Report, the most recent and most definite opus from the UN.

... There is no unimpeachable raw data in which we can have confidence. There is a large cast of impeachable characters in the Climategate drama with an evident appetite for cooking the books.

And there are but two honest options for our governments to now employ. They can choose to redo the studies, with data, scientists, and a peer-review process that can be trusted. Or they can recognize that the IPCC process has been politicized from the start, and that the prima facie evidence for dangerous global warming does not meet the threshold required to prolong the scientific sham of the generation. 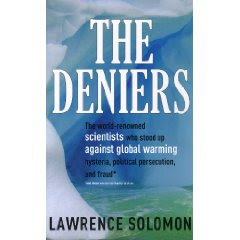 HERE ARE THE DENIERS:

THESE GUYS ARE EVERY BIT AS SMART AND SERIOUS AND WELL-TRAINED AND RESPECTED AS THE CRU FOLKS USED TO BE!

EARLIEST SNOW EVER IN HOUSTON AND NEW ORLEANS.