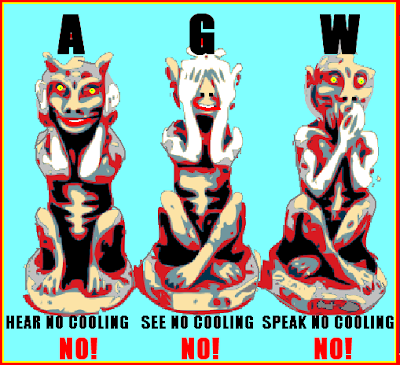 Consider the simple fact, drawn from the official temperature records of the Climate Research Unit at the University of East Anglia, that for the years 1998-2005 global average temperature did not increase (there was actually a slight decrease, though not at a rate that differs significantly from zero).

Yes, you did read that right. And also, yes, this eight-year period of temperature stasis did coincide with society's continued power station and SUV-inspired pumping of yet more carbon dioxide into the atmosphere.

... Marketed under the imprimatur of the IPCC, the bladder-trembling and now infamous hockey-stick diagram that shows accelerating warming during the 20th century - a statistical construct by scientist Michael Mann and co-workers from mostly tree ring records - has been a seminal image of the climate scaremongering campaign. Thanks to the work of a Canadian statistician, Stephen McIntyre, and others, this graph is now known to be deeply flawed.

... Climate changes naturally all the time, partly in predictable cycles, and partly in unpredictable shorter rhythms and rapid episodic shifts, some of the causes of which remain unknown. We are fortunate that our modern societies have developed during the last 10,000 years of benignly warm, interglacial climate. But for more than 90 per cent of the last two million years, the climate has been colder, and generally much colder, than today. The reality of the climate record is that a sudden natural cooling is far more to be feared, and will do infinitely more social and economic damage, than the late 20th century phase of gentle warming.

ONE OF THE MAJOR REASONS THE LEFT IS SO DESPERATE TO PASS A CO2 TAX SCHEME RIGHT AWAY IS THAT THEY KNOW IT HASN'T WARMED FOR A DECADE AND THAT IT'S ABOUT TO GET REALLY COLD.

IOW: WITHIN A YEAR, THE JIG IS UP.

ALL WE HAVE TO DO IS DELAY THEM UNTIL THE ELECTION OF 2010.

AND THEN WE CAN VOTE THE SCHEMERS OUT OF OFFICE.

Posted by Reliapundit at 7:47 PM